Chrome represents policies as JSON values internally. Up until version 37 all Chrome policies were of simple types:

Additionally, Chrome has supported some policies as Lists of Strings (example: URLBlocklist).

Some policies need more complex values that don't fit well in any of these types. For example, ExtensionInstallForcelist defines a list of extensions to install automatically. Each extension is defined by its extension ID and a remote update URL (to support extensions from private stores). This can be easily represented in JSON as a list of objects, where each object has two strings:

Unfortunately there is no native GPO type to represent this and the policy needs to be configured as a List of Strings, where each string contains both the ID and the update URL separated by a semicolon:

Chrome 37 introduced new policies with complex values that don't fit in any of the native GPO or Registry types: RegisteredProtocolHandlers and Managed Bookmarks.

All of these policies can be configured as strings that contain a JSON value. Any JSON editor should able to edit and validate the JSON string, including some online editors.

JSON also supports objects (sometimes called dictionaries), which contain a string key mapped to any other valid JSON value (which may be a list or another object/dictionary): { "key": "string value", "key that maps to integer": 123, "key that maps to list": [ 1, 2, 3 ] }

The examples below will configure the Managed Bookmarks policy to build this bookmark structure:

Each bookmark is a JSON object with a "name" key indicating its name, and a "url" key indicating the URL or a "children" key that maps to another list of bookmarks, to create folders.

The JSON string for the structure listed above is: 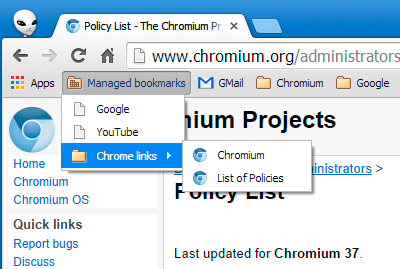 If you use the ADM or ADMX templates you can just locate the policy to configure (in this case, "Managed Bookmarks"), enable it, and set the JSON string in the string field for that policy: 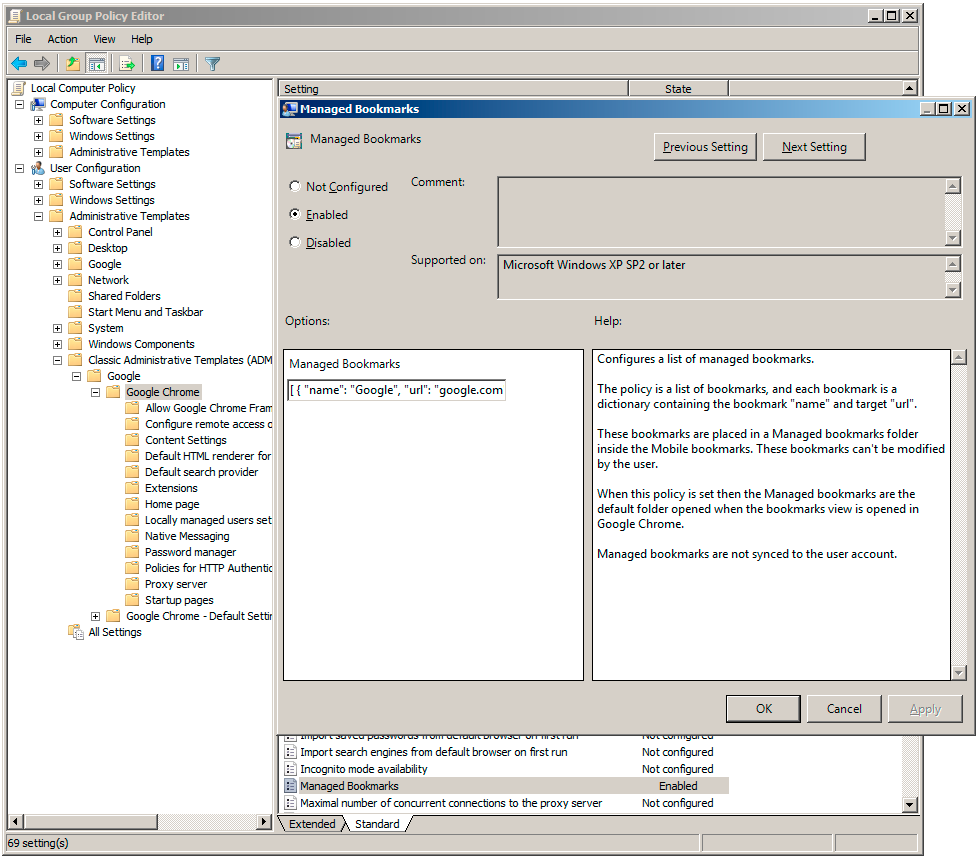 Note: Chrome only loads policies directly from the registry on AD enrolled machines.

Chrome policies can be configured under Software\Policies\Google\Chrome (or Software\Policies\Chromium for Chromium) in HKCU or HKLM. For complex policies, just create a new String value with the policy name and set the JSON string in the Value field.

Option 3: expanded JSON in the registry

Note: Chrome only loads policies directly from the registry on AD enrolled machines.

Chrome will try to load JSON lists and JSON objects/dictionaries directly from the registry too, for the new complex policies. This format makes it easier to directly edit the policy values in the registry but requires understanding how a JSON list and a JSON dictionary can be represented in the registry.

The basic rules are:

Objects/dictionaries can contain any of these simple types. Just add the value as described above, and use the "Value Name" field to set the name of the entry in the dictionary.

Lists are represented just like dictionaries, but they key names must be "1", "2", "3" and so on. Note that counting starts at 1 and not at 0 (this is what the GPO editor does for lists too). Chrome knows the expected policy format internally, and will load each entry as a list or object as appropriate.

Here's an example for the Managed Bookmarks configuration listed above. Start by creating a new registry Key (these are shown as folders on the left side) named "ManagedBookmarks":

The value of this policy is a list of objects, so this folder will contain other subfolders named "1", "2", etc. Start by creating a subfolder named "1":

The contents of this folder are the keys for the first object inside the list of bookmarks. You can now add the 2 strings that declare a bookmark, the "name" and the "url". This configuration should be enough to show one bookmark in Chrome.

To add bookmark folders, start by adding a new entry in the main list (see folder "3" below) and give the folder a "name" too. But instead of specifying a "url", add a new subfolder named "children" that contains the bookmarks for that folder. The "children" folder is a list of bookmarks, so it should contain subfolders named "1", "2", etc again.

Each child bookmark of the folder needs to have its "name" and "url" defined again:

The first step to diagnose problems is the internal chrome://policy page. You should see your policies listed in that page and their corresponding values.

Policies configured via GPO have some delay until they are applied; run the gpupdate command to flush them. If you use the registry then note that Chrome only loads those policies on machines that are enrolled to an AD domain.