When will a fix ship in Chrome (stable or canary)?

Here's a quick guide on how to track changes as they make their way to releases of Chrome.

This includes all changes to Chrome, including stuff for HTML, CSS, DOM, & DevTools.

First things first, chromestatus.com was built for this. If the feature is big, it will probably be there.

On the left you can see all features currently in beta. Those should be in stable soon.

You can search for other features and view what release they are Enabled by default. 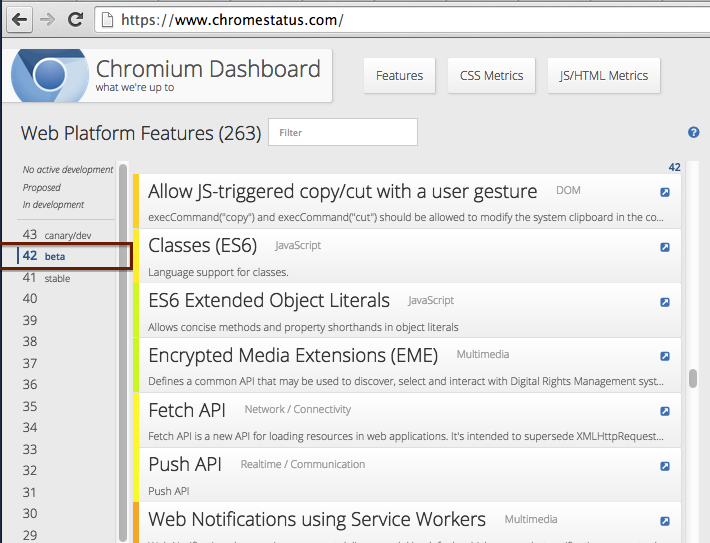 Alright, buckle up. This is fun stuff.

It all comes down to tracking the Chromium revision number.

Waiting for it to hit Chrome Stable?

Generally it takes ~10 weeks from a commit landing to hit stable.

Take the Chromium revision number (or the git SHA) and drop it into storage.googleapis.com/chromium-find-releases-static/

Visit ==https://omahaproxy.appspot.com== for the version numbers of the current releases of Chrome.

When does version X ship in stable channel?

Waiting for it to land in Canary or an Dev build?

You could use the above technique... but here's the guide for hackers or folks who don't want to wait for Canary or Dev Channel:

Get a fresh Chromium build

Enjoy the fix or feature you've been waiting for!