OBSOLETE: The contents need to be updated

Chromium OS will be supporting multiple languages other than English. Regardless of the UI language (the language shown in menu items and any other strings in Chromium OS), Chromium OS should allow you to type in many languages. We will build text input support for Chromium OS on top of the existing text input technologies available for Linux.

There are also Chromium OS-specific requirements, such as supporting both x86 and ARM processors and following Chromium OS UI design guidelines. Meeting all of these requirements is not trivial. We'll reuse existing input technologies as much as possible.

We will support the following languages by any of the ways listed above.

For languages that can be supported by Simple Keyboard or Switchable Keyboard, we'll use XKB (X Keyboard Extension). For languages in other categories, we'll use IBus (Intelligent Input Bus). The following diagram illustrates the basic architecture of text input support for Chromium OS. 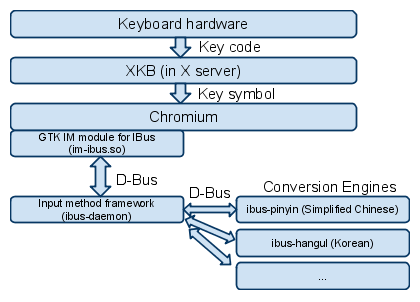 We will create the XKB definition file for each keyboard layout.

We decided to use IBus for the following reasons.

New: For Japanese, we plan to port [Google Japanese Input](http://www.google.com/intl/ja/ime/) to Chromium OS.

Will be implemented as separate process. Communicates to IBus-daemon via D-Bus.

New: Here's a screenshot of a work-in-progress version of the candidate window. A demo is also available. 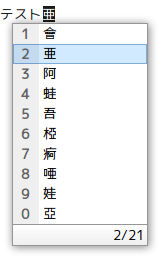 Will be part of Chromium's options dialog. Communicates to X server via libcros.

Will be part of Chromium's options dialog. Communicates to IBus-daemon via libcros.

Will be part of Chromium's options dialog. Communicates to conversion engines via libcros.

Will be part of Chromium's status area (near the time and the power indicator). Communicates to IBus-daemon and X Server via libcros. We'll integrate the input language selector with the keyboard layout selector, unlike traditional Linux desktops. Here's a mockup of what it will look like: 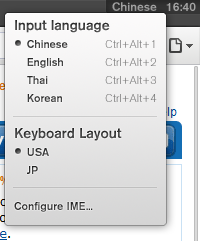 Probably not required, because Google accounts (that is, email addresses) used for login are all in ASCII characters, as are the passwords. We will implement it once it becomes necessary. Internationalized keyboards can be supported by XKB configurations.

Sync with the cloud

Text input-related data is synced with the cloud. We sync the user's choices of languages, keyboard layouts, and input method extensions as described in Syncing Languages and Input Methods.

In the future, we may sync:

Syncing configuration data is a must, but users can opt out of syncing other user data.

An indirect input layer like IBus can be a security weak point, as it can be exploited as a key logger. We plan to use GRSecurity to restrict resource access from IBus and conversion engines. We also plan to review the security of IBus.

Although the following goals aren't targeted for the initial version, these are some of our long-term goals: