This document can now be found here: https://chromium.googlesource.com/chromiumos/docs/+/HEAD/sandboxing.md

The content below is a (possibly out-of-date) copy for easier searching.

In Chrome OS, OS-level functionality (such as configuring network interfaces) is implemented by a collection of system services, and provided to Chrome over D-Bus. These system services have greater system and hardware access than the Chrome browser.

Separating functionality like this prevents an attacker exploiting the Chrome browser through a malicious website to be able to access OS-level functionality directly. If Chrome were able to directly control network interfaces, a compromise in Chrome would give the attacker almost full control over the system. For example, by having a separate network manager, we can reduce the functionality exposed to an attacker to just querying interfaces and performing pre-determined actions on them.

Chrome OS uses a few different mechanisms to isolate system services from Chrome and from each other. We use a helper program called Minijail (executable minijail0). In most cases, Minijail is used in the service's init script. In other cases, Minijail wrappers are used if a service wants to apply restrictions to the programs that it launches, or to itself.

Just remember that code has bugs, and these bugs can be used to take control of the code. An attacker can then do anything the original code was allowed to do. Therefore, code should only be given the absolute minimum level of privilege needed to perform its function.

Aim to keep your code lean, and your privileges low. Don‘t run your service as root. If you need to use third-party code that you didn’t write, you should definitely not run it as root.

Use the libraries provided by the system/SDK. In Chrome OS, libchrome and libbrillo (née libchromeos) offer a lot of functionality to avoid reinventing the wheel, poorly. Don‘t reinvent IPC, use D-Bus or Mojo. Don’t open listening sockets, connect to the required service.

Don't (ab)use shell scripts, shell script logic is harder to reason about and shell command-injection bugs are easy to miss. If you need functionality separated from your main service, use normal C++ binaries, not shell scripts. Moreover, when you execute them, consider further restricting their privileges (see section Minijail wrappers).

Just tell me what I need to do

The first sandboxing mechanism is user ids. We try to run each service as its own user id, different from the root user, which allows us to restrict what files and directories the service can access, and also removes a big chunk of system functionality that‘s only available to the root user. Using the permission_broker service as an example, here’s its Upstart config file (lives in /etc/init):

Minijail's -u argument forces the target program (in this case permission_broker) to be executed as the devbroker user, instead of the root user. This is equivalent of doing sudo -u devbroker.

The user (devbroker in this example) needs to first be added to the build system database. An example of this (for a different user) can be found in the following CL: https://crrev.com/c/361830

Next, the user needs to be installed on the system. An example of this (again for a different user) can be found in the following CL: https://crrev.com/c/383076

There‘s a test in the CQ that keeps track of the users present on the system that request additional access (e.g. listing more than one user in a group). If your user does that, the test baseline has to be updated at the same time the accounts are added with another CL (e.g. https://crrev.com/c/894192). If you’re unsure whether you need this, the PreCQ/CQ will reject your CL when the test fails, so if the tests pass, you should be good to go!

You can use CQ-DEPEND to land the CLs together (see How do I specify the dependencies of a change?).

Some programs, however, require some of the system access usually granted only to the root user. We use Linux capabilities for this. Capabilities allow us to grant a specific subset of root's privileges to an otherwise unprivileged process. The link above has the full list of capabilities that can be granted to a process. Some of them are equivalent to root, so we avoid granting those. In general, most processes need capabilities to configure network interfaces, access raw sockets, or performing specific file operations. Capabilities are passed to Minijail using the -c switch. permission_broker, for example, needs capabilities to be able to chown(2) device nodes.

Capabilities are expressed using the format that cap_from_text(3) accepts.

Many resources in the Linux world can be isolated now such that a process has its own view of things. For example, it has its own list of mount points, and any changes it makes (unmounting, mounting more devices, etc...) are only visible to it. This helps keep a broken process from messing up the settings of other processes.

In Chromium OS, we like to see every process/daemon run under as many unique namespaces as possible. Many are easy to enable/rationalize about: if you don't use a particular resource, then isolating it is straightforward. If you do rely on it though, it can take more effort.

Here‘s a quick overview. Use the command line option if the description below matches your service (or if you don’t know what functionality it‘s talking about -- most likely you aren’t using it!).

The -N option does not work on Linux 3.8 systems. So only enable it if you know your service will run on a newer kernel version otherwise minijail will abort for the older kernels (Chromium bug 729690).

Removing access to the filesystem and to root-only functionality is not enough to completely isolate a system service. A service running as its own user id and with no capabilities has access to a big chunk of the kernel API. The kernel therefore exposes a huge attack surface to non-root processes, and we would like to restrict what kernel functionality is available for sandboxed processes.

Copyright (c) 2012 The Chromium OS Authors. All rights reserved. # Use of this

Any syscall not explicitly mentioned, when called, results in the process being killed. The policy file can also tell the kernel to fail the system call (returning -1 and setting errno) without killing the process:

To write a policy file, run the target program under strace and use that to come up with the list of syscalls that need to be allowed during normal execution. The generate_syscall_policy.py script will take strace output files and generate a policy file suitable for use with Minijail. On top of that, the -L option will print the name of the first syscall to be blocked to syslog. The best way to proceed is to combine both approaches: use straceand the script to generate a rough policy, and then use -L if you notice your program is still crashing. Note that the -L option should NOT be used in production.

The policy file needs to be installed in the system, so we need to add it to the ebuild file:

And finally, the policy file has to be passed to Minijail, using the -S option:

Some daemons store user data on the user‘s cryptohome under /home/.shadow/<user_hash>/mount/root/<daemon_name> or equivalently /home/root/<user_hash>/<daemon_name>. For instance, Session Manager stores user policy under /home/root/<user_hash>/session_manager/policy. This is useful if the data should be protected from other users since the user’s cryptohome is only mounted (and therefore decrypted) when the user logs in. If the user is not logged in, it is encrypted with the user's password.

However, if a daemon is already running inside a mount namespace (minijail0 -v ...) when the user's cryptohome is mounted, it does not see the mount since mount events do not propagate into mount namespaces by default. This propagation can be achieved, though, by making the parent mount a shared mount and the corresponding mount inside the namespace a shared or slave mount, see the shared subtrees doc.

To set up a cryptohome daemon store folder that propagates into your daemon‘s mount namespace, add this code to the src_install section of your daemon’s ebuild:

This directory is never used directly. It merely serves as a secure template for the chromeos_startup script, which picks it up and creates /run/daemon-store/<daemon_name> as a shared mount.

In your daemon's init script, mount that folder as slave in your mount namespace. Be sure not to mount all of /run if possible.

Your daemon can now use /run/daemon-store/<daemon_name>/<user_hash> to store user data once the user's cryptohome is mounted. Note that even though /run/daemon-store is on a tmpfs, your data is actually stored on disk and not lost on reboot.

Be sure not to write to the folder before cryptohome is mounted. Consider listening to Session Manager's SessionStateChanged signal or similar to detect mount events. Note that /run/daemon-store/<daemon_name>/<user_hash> might exist even though cryptohome is not mounted, so testing existence is not enough (it only works the first time). 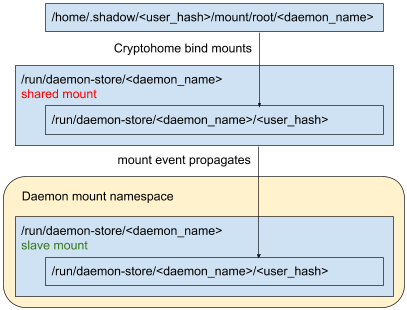