Chromium OS > How Tos and Troubleshooting >

with the help of Terry Lambert - tlambert@chromium.org

This document describes the work done in order to enable TSC as a clocksource on Intel Chromebooks (affects Mario, Alex and ZGB as they have constant TSC).

The Linux kernel uses different time sources. The most interesting are the HPET (High Precision Event Timer) and the TSC (Time Stamp Counter). The TSC is the preferred clocksource between the two counters, as it is the fastest one, however it can only be used if it is stable. Currently there are 4 types of TSC present:

By looking into the flags entry in /proc/cpuinfo we can determine what type of TSC the current processor has (possible values we check for are constant_tsc, nonstop_tsc) The constant TSC is the type of TSC currently present on our Chromebooks (future Chromebooks may have non-stop TSC). Therefore the TSC stops during C-state transitions and must be resynchronized in order to track time again. A patch written by Michael Davidson (md@google.com) currently exists which enables TSC resynchronization for userspace uses on AMD architectures. In that patch the TSC gets synchronized only for userspace calls.

Although the patch by md@ does a lot of the heavy work, it can’t be applied cleanly on our configuration for 2 reasons:

My work to date updates the patch so that it can be used on our architecture, by modifying the code to work on 32 bit and making the necessary changes so that the TSC is used as a kernel clock source. I’ve also managed to improve synchronize the TSCs between the CPUs within 300 cycles of each other. The current results and limitations are:

The current problem is that we’re the synchronization induces a warp of a few thousand cycles, which is unacceptable. I’ve been working very hard with Terry during the last week of my internship to make this go away and apparently the scaling factor is one of the causes, along with the way the TSC gets updated from the HPET. However, I am still working to find a complete solution to this problem. 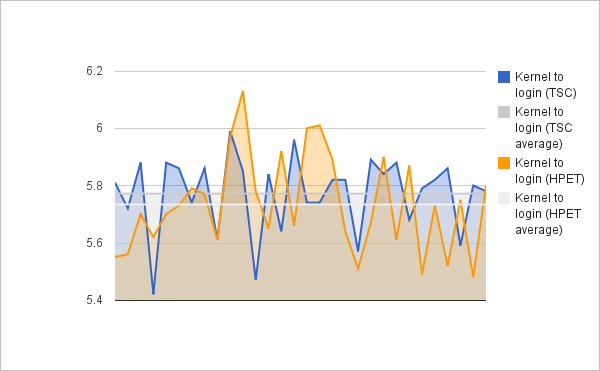 Boot time was measured using the bootperf autotests. The setup was the following:

The results are presented on the right; The boot time with the TSC counter is just a little bit slower on these 30 runs, with an average of 5.77 for the TSC version versus 5.73 for the HPET one. This is explicable as the extra initialization (there is also an extra calibration loop for a few ms) adds time which might cancel any improvements.

The efficiency of gettimeofday was measured by doing a simple benchmark, calling gettimeofday for 100.000.000 times. The benchmark was run on the same Alex using a HPET and a TSC clocksource and the results were:

4.3. Number of calls to gettimeofday

Philip Guo, another intern, created a strace++ tool which counts system calls. He used it to run Chrome on ChromeOS and get the number of times gettimeofday gets called. On his run of Chrome with a 90 second YouTube video playing it got called 18195 times. These calls, according to my benchmark would take 0.0254 seconds using the HPET and 0.008 seconds using the TSC (which means that 0.017 seconds were saved during a 90 second period, or just 0.01 % improvement). It would be interesting to see what happens for non-optimized flash websites. However real benchmarks would need to be run after the synchronization works completely.

Here are the things that still need to be done after my internship is over: