Getting to know the package build system we use.

Learning something about the way we use portage.

To familiarize with autotest concepts, you should start with the upstream Autotest documentation at: https://github.com/autotest/autotest/wiki/AutotestApi The rest of this document is going to use some terms and only explain them vaguely.

At a high level, tests are organized in test cases, each test case being either server or client, with one main .py file named the same as the test case, and one or more control files. In order to be able to perform all tasks on a given test, autotest expects tests to be placed in a monolithic file structure of: /client/tests/ /client/site_tests/ /server/tests/ /server/site_tests/ Each test directory has to have at least a control file, but typically also has a main job module (named the same as the test case). Furthermore, if it needs any additional files checked in, they are typically placed in a files/ directory, and separate projects that can be built with a Makefile inside the src/ directory. Due to structural limitations in Chromium OS, it is not possible to store all test cases in this structure in a single large source repository as upstream autotest source would (placed at third_party/autotest/files/ in Chromium OS). In particular, the following has been required in the past: - Having confidential (publicly inaccessible) tests or generally per-test ACLs for sharing only with a particular partner only. - Storing test cases along with the project they wrap around, because the test requires binaries built as a by-product of the project’s own build system. (fe. chrome or tpm tests) Furthermore, it has been desired to generally build everything that is not strongly ordered in parallel, significantly decreasing build times. That, however, requires proper dependency tree declaration and being able to specify which test cases require what dependencies, in addition to being able to process different “independent” parts of a single source repository in parallel. This leads to the ebuild workflow, which generally allows compositing any number of sources in any format into a single monolithic tree, whose contents depend on build parameters. 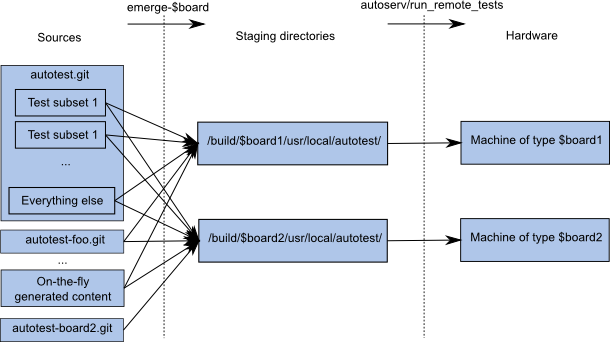 This allows using standard autotest workflow without any change, however, unlike what upstream does, the tests aren’t run directly from the source repository, rather from a staging read-only install location. This leads to certain differences in workflow:

NOTE: This assumes some basic knowledge of how ebuilds in Chromium OS work. Refer to for example http://www.chromium.org/chromium-os/how-tos-and-troubleshooting/portage-build-faq for some documentation. An autotest ebuild is an ebuild that produces test cases and installs them into the staging area. It has three general tasks:

Autotest eclass is inherited by all autotest ebuilds, only requires a number of variables specified and works by itself otherwise. Most variables describe the locations and listings of work that needs to be done:

As soon as an overlap between ebuilds happens, either an outside mechanism has to ensure the overlapping tests are never enabled at the same time, or file collisions happen.