The Aura Client API is an API Aura uses to communicate with the client application using the Aura system. Since Aura is very simple, providing just basic window and event types, there are many details it cannot know about directly. It delegates some functionality to its client (such as window stacking) and also provides the client API as a conduit for users of Aura to communicate with the embedding environment.

For example, Aura does not implement tooltips directly, these are a feature implemented by an client application. The Client API has knowledge of tooltips however so that a system like Views (which depends on Aura) can specify tooltip parameters. The client application can interpret this data and show the relevant UI.

The Aura Window class supports opaque properties, and a list of well known keys is provided as part of the Client API.

In the ChromeOS Desktop Window Manager, the Aura Client is a component known as the "Aura Shell" or "Ash": 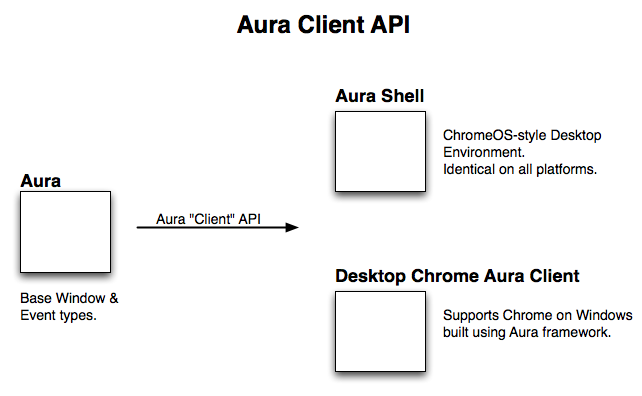 A breakdown of responsibility between Aura and the Aura Shell (as implemented for ChromeOS):

In the diagram above, I show a second Aura Client API implementation. This is what we will end up with when we transition Desktop Chrome on Windows to use the Aura system, sometime in 2012. This will allow us to hardware accelerate our UI.

With this in mind, it is important to keep the Aura layer of the framework clean and simple, since much of the ChromeOS DWM functionality and feature set is not relevant to desktop Chrome, just the basic windowing primitives.