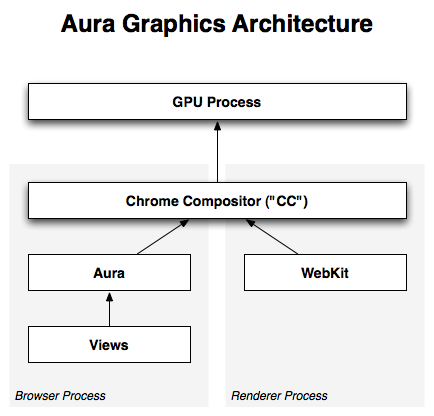 Each Aura Window owns a corresponding compositor layer. The layer tree corresponds roughly to the window tree (though Views also supports layers, so a single Aura Window can have nested Layers created by Views within that Window).

If the Window's layer has a texture that texture is drawn by the compositor. Aura is transitioning to using the Chromium Compositor ("CC"). At time of writing CC is part of WebKit, but there is a nascent effort to extract it into its own library within Chromium.

The Compositor maintains two trees of layers, one on the UI thread and one (optionally) on the Compositor thread. This improves performance for animations and interactive events like scrolling. See CC documentation for more information. The CC library talks to the GPU process via command buffer to do the final rendered output.

At the time of writing we have two layer trees, one for the UI and one for content from the renderer process. The renderer process uses WebLayer directly, while the UI wraps it in a class ui::Layer in ui/compositor, which provides some additional utilities useful to Aura and Views.

Once CC is extracted into a standalone library we will explore replacing ui::Layer functionality with direct use of CCLayer.

A draw can be triggered by two sources: the underlying native window owned by the RootWindowHost can be sent a redraw notification from the system (e.g. WM_PAINT or Expose), or an application event can trigger a redraw by calling ScheduleDraw() on any number of framework objects (Compositor, RootWindow, etc). In the latter case a task is posted that calls Draw().

Layer also supports a method SchedulePaint(), which is exposed through Window and also NativeWidgetAura and used by Views when some sub-region of the layer is to be marked invalid. The layer stores the current invalid rect which is a union of all invalid rects specified since the last validation.

When the compositor draws, it performs a depth-first walk of the layer tree, and if any of the layers it encounters has an invalid rectangle, it is asked to repaint its contents. The compositor does this via WebKit::WebContentLayerClient, implemented by ui::Layer. The layer asks its delegate to repaint via a call of OnPaintLayer() which takes a Skia canvas sized to the invalid rect. In Aura, the delegate is the Window, and the Window asks its delegate to repaint. In production this is often a NativeWidgetAura, a Views type. As mentioned earlier, Views can also have layers directly, and as such a View can also be a layer's delegate.

Once the draw is complete the invalid region is validated so no further paint notifications are sent until explicitly requested by a subsequent invalidation.