The browser is one of the most heavily multi-tasked and long-running programs on a user's computer. For many users, the uptime of Chromium nearly matches that of their computer. One aspect of the Chromium user experience that frustrates users is accidentally quitting due to tapping Cmd+Q. This keyboard shortcut is near other commonly-used accelerators like Cmd+Tab and Cmd+W. The goal of this improvement is to find a non-intrusive way to prevent accidental quitting while still allowing users to quit easily and quickly.

The proposed experience, from issue 27786, is to display a floating window when the user taps Cmd+Q that instructs them to continue holding in order to quit. After a few seconds, the quit is confirmed and Chrome proceeds to exit. If the user does not continue to hold Cmd+Q, the floating window will remain on screen for a few seconds before fading out to give the user instructions if they do actually intend to quit.

We have not yet decided if this UI is the right one, and there are some concerns that presenting users with such non-standard UI will help them learn habits that are not applicable to other applications. Results from the experiment will determine whether we ship this feature.

A Look at Other Browsers:

Safari asks if you want to quit and has a Remmber Me checkbox. Safari's solution is adequate (easy to turn off if it gets in your way, but a good default safety net), but it forces an interruption in the user experience. The proposed UI allows a user to keep her hand on the same keys and just continue pressing to confirm a quit.

Firefox asks whether you want to Exit, Cancel, or Save and Exit. It's asking the wrong question at the wrong time: users shouldn't have to predict whether or not they want to recreate a session when quitting. Chrome's session restore feature makes this a non-issue, so the question is not asked. They also have a Remember Me checkbox.

This experiment currently only exists on Mac. We hook into -(NSApplicationTerminateReply)applicationShouldTerminate:(NSApplication*)sender and execute this UI there. We spin a nested run loop manually in NSEventTrackingRunLoopMode by waiting for a KeyUp event. If no events occur within the set threshold duration, the quit is confirmed. Since -applicationShouldTerminate: method is not normally called as part of Chromium's unique shutdown process (a necessity of its multi-process architecture), it is manually called from -(BOOL)tryToTerminateApplication:(NSApplication*)app.

While prototyping, we discovered that holding down Cmd+Q and simply quitting after a set duration results in a frustrating behavior: because the system sends multiple KeyDown events while keeping the keys pressed, after Chromium quits, the system will start sending Cmd+Q to the previous key application, which then quits as well. This would obviously be extremely frustrating, so instead, we mark the quit as confirmed/committed after the set duration, but do not finalize the quit until the next KeyUp event. In order to get users to release the key combination without introducing more text-based UI, we animate all of the open windows' opacity to 0. This change in state convinces users that Chromium has "quit" and when the KeyUp event is received, the process begins its normal shutdown procedure (as it was blocked by this nested run loop) by returning NSTerminateNow.

If the user does not hold down Cmd+Q long enough to meet the threshold duration, we return NSTerminateCancel which in turn causes -tryToTerminateApplication: to return NO. This aborts the quit process. The floating panel lingers on-screen for a second before fading out, which gives users who are unfamiliar with this procedure a chance to learn how to quit Chromium. 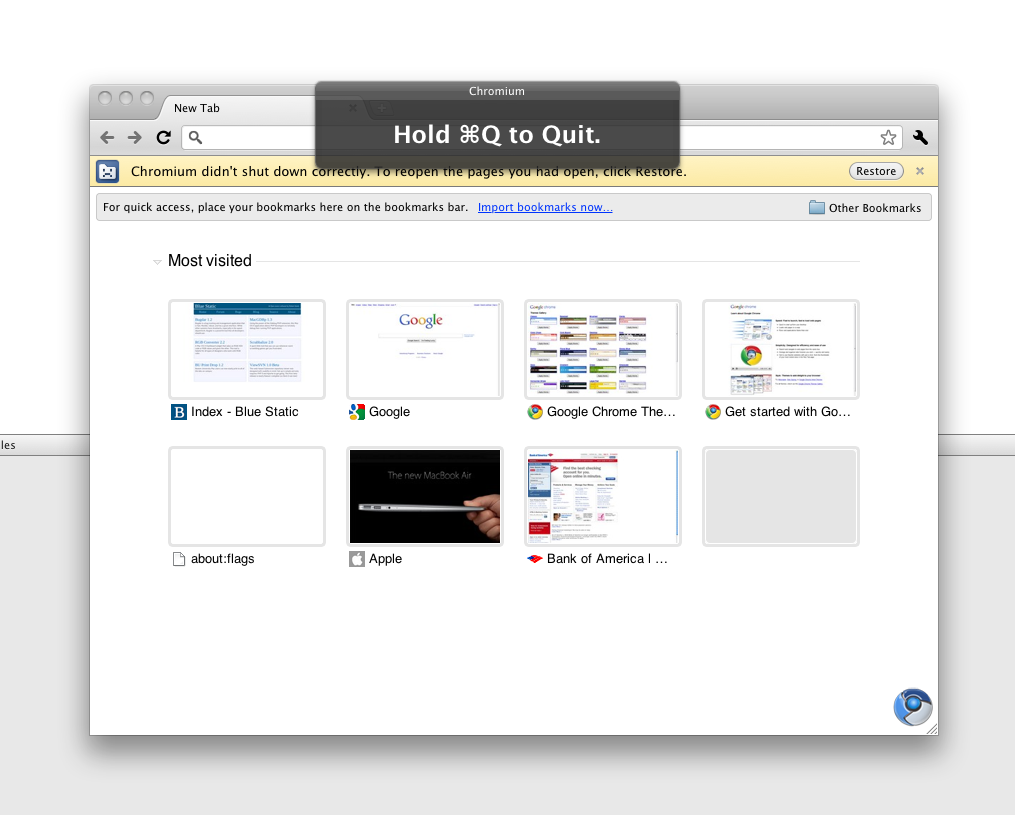