being the story of how a fresh new component is born, or how a veteran feature is rescued from a tangled web of ugly dependencies and reborn as a shiny component.

The //components layer is a place for optional features that products built out of the Chromium codebase may want to use. Most of the components currently there are features that previously lived in //chrome but were extracted so that they could be reused by other top-level applications such as //android_webview.

New features that will get used by more than one top-level application should be written as components. For top-level applications other than Chrome for Android, features they wish to reuse should first be extracted into //components. This document is a cookbook -type guide for how to create a new component, and how to extract an existing feature from //chrome into a component. The below diagram shows the place of components in the Chromium hierarchy. Note that the diagram is over-simplified in that not all components allow dependences on //content; for example, a component that is shared by iOS will either disallow dependencies on //content entirely or be in the form of a layered component. 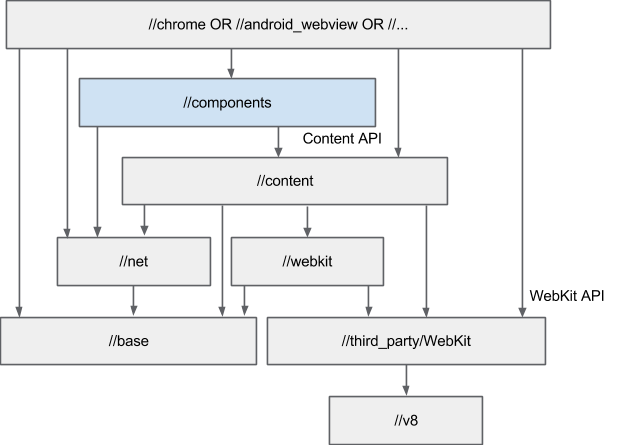 Creating a new component is straightforward. Follow the rules in the design document, and the examples already in the //components directory. TL;DR version:

Extracting an existing feature to a Browser Component

These are the typical steps to extract a feature:

Note that we have tools for moving source files that updates include guards and updates references to files (#includes and #imports in other source files, references in .gyp(i) files); see src/tools/git/{move_source_file.py, mass-rename.py}. We also have a tool for doing search-and-replace across the codebase using Python regular expression syntax; see src/tools/git/mffr.py. Finally, we highly encourage the usage of "git cl format" to ease the tedious process of reformatting that often needs to occur when doing refactorings.

If the component will be shared by iOS and has //content dependencies, then you have two choices:

The first alternative is appropriate when the //content dependencies are not

significant (e.g., dependencies on content::BrowserThread that can be replaced by having SingleThreadedTaskRunners injected into the component). The second alternative is necessary when the feature has significant //content dependencies, e.g. it interacts heavily with content::WebContents.

here. For an example of the structure of a layered component, please see here.

Please feel free to add new sections, add clarifications and examples to this section, etc. If you don't have edit rights to the site, feel free to add comments at the bottom of the page with additional recipes.

Dependency inversion is the most fundamental approach to breaking dependencies. This is the pattern where you switch from object Foo depending concretely on object Bar, and instead object Foo defines an interface FooDelegate that it needs fulfilled by any embedder; this interface is then implemented by Bar, which passes a FooDelegate pointer to itself or its delegate implementation to Foo.

Large Dependencies: Do them First

In these cases, you’ve probably discovered that the component you want isn’t a “leaf node,” whereas its dependency may be. In these cases you probably want to componentize this dependency first. Exceptions to this might be where the dependency would be fulfilled in entirely different ways, rather than in one common way, by different embedders; if this is the case then a large client interface may still be appropriate.

It’s very common in //chrome that an “everything” object such as Profile is passed in to initialize an object or a subsystem, which then turns around and retrieves just a couple of more fundamental objects from the Profile.

We’ve seen this many times, e.g. a Profile being passed and the only things retrieved from it being the PrefService associated with the Profile, and the SequencedTaskRunner for the IO thread.

In cases like this, you should change the code to pass the most fundamental objects possible, rather than passing more complex “everything” or “bag of stuff” objects. See also Law of Demeter.

Sometimes, you will encounter an object that brings in a lot of dependencies, but at the same time seems to have functionality that is core to the component. It might e.g. be an object that has some internal state machine that the component needs to use, and also initiates or participates in a bunch of UI interactions.

In cases like this, consider whether the object needs to be split into multiple objects, where one is the core business logic (which stays with the component) and another is the part that brings in all the dependencies (this could stay with the embedder).

It's worth noting that the programming interfaces that result from the types of dependency-breaking operations listed above are not always optimal, in fact they are often not as nice as what would have resulted from a feature being written as a component from the start. Once you've finished breaking dependencies, it can certainly be worth going back, taking a fresh look at the interfaces that resulted, and cleaning them up.

To verify dependencies, use tools/checkdeps/checkdeps.py – to use on a different repository, such as Blink, specify the --root option:

You can also specify a subdirectory to check:

There are some wrapper scripts to simplify this, like Tools/Scripts/check-blink-deps.

There are a few wrinkles to be aware of, which result in checkdeps not checking particular directories, confusingly returning SUCCESS without any work. You can specify --verbose to check that it actually is doing work.