The font cache is obsolete. For the current implementation, see the DirectWrite font proxy

With Chrome version 38 DirectWrite has been enabled by default on Windows Chrome. With Chrome’s secure sandbox architecture DirectWrite poses a basic but significant problem. DirectWrite relies on Font Cache Service for system installed fonts. It communicates with Font Cache service over Windows mostly undocumented and traditional IPC mechanism of ALPC (Asynchronous Local Procedure Call.). Due to severe sandbox restrictions DirectWrite is not able to communicate to Font Cache service from Chrome Renderer process. This causes main hurdle for implementation and usage of DirectWrite from Renderer process. DirectWrite allows loading of Custom Fonts separately from System Fonts. We used this concept to enable DirectWrite in current release by loading system font files as custom fonts. Though this mechanism currently works, it definitely adds to load time for renderer (Latency range of 40th percentile less than ~226ms and 90th percentile ~3000ms). To solve this load latency issue we are implementing Font Cache in the Browser process, which will be shared by all renderers. The Font Cache will be scoped only for loading all font families and such properties during initial DirectWrite font enumeration process. Individual font file for Glyphs will still be directly loaded from disk.

Function of interest in this class is CreateEnumeratorFromKey, which returns a font file enumerator to the caller.

This class provides one way enumerator using two function MoveNext and GetCurrentFile. MoveNext lets you move cursor to next file in the list where as GetCurrentFile gets you file at the cursor. We create a reference to font file at cursor using our custom font file loader and return that reference to caller.

As name suggests this class is responsible for loading actual font file whether it is from disk, resources or somewhere else. This class returns a new instance of FontFileStream for the file.

This class actually lets call read bytes and fragments of Font File. DirectWrite during initial phase of building collection seem to use methods provided by this class to read various data table entries, which include information such as Font Families contained in this file. Main function implemented here is ReadFileFragment(), which returns binary data starting a specified offset and of specified size.

The journey for all this class maze starts from a call to function IDWriteFactory::CreateCustomFontCollection(). We supply our own custom FontCollectionLoader as parameter to this function so that DirectWrite ends up calling us for loading of the actual collection.

[ Before calling CreateCustomFontCollection we load list of system installed fonts from registry (HKEY_LOCAL_MACHINE\Software\Microsoft\Windows NT\CurrentVersion\Fonts.). This list is in the form of key value pair, where usually key is the name of the main font family contained in the file e.g. Arial (TrueType) and value is the path to file which contains that family. e.g. arial.ttf. When full path is not specified system uses standard font location such as \windows\fonts. In our current implementation we ignore all font files which have absolute path specified. We are doing this in order to avoid any clashes with our sandbox policy. e.g. if path for a file is c:\program files\xyz\arial.ttf, we cannot load this file from renderer as this particular path is sandboxed. We have added Windows standard font location such as \windows\fonts into our sandbox policy to load font files from there. ]

DirectWrite then invokes function to create an enumerator to load all font files through our FontCollectionLoader. We expose instance to our custom enumerator for loading these files (FontFileEnumerator). Then DirectWrite enumerates and creates instance of each font file using MoveNext and GetCurrentFile functions. Seemingly DirectWrite goes through entire font file collection for generating a copy of local cache in some undocumented data structure. Through FontFileEnumerator and FontFileLoader when we return instance to FontFileStream to represent single font file in our collection, DirectWrite calls ReadFileFragment multiple times to get required data to fill internal data structures. After entire enumeration is done, DirectWrite then will satisfy some of the queries such as how many font families are available etc, from internal data structures for actual Glyphs it again creates instance of our FontFileStream using the key that we provided during enumeration time.

Given above flow we can clearly see that DirectWrite is dealing with Font Collection in two phases, one phase is to load and enumerate entire collection to read all font files for properties and store them in internal data structure, the other phase is to actually read glyphs and data from specific font file. Our theory is that the font file collection enumeration is the key part contributing to initial latency and we are trying to minimize that using our font cache. One problem with loading all font files that are installed on the system is that they are large in numbers. From UMA numbers 55th percentile files to be loaded are ~340. Which means every new renderer instance will go through loading of those many files. Given our understanding of how antivirus and antimalware programs work, we think that these programs sometime add checks for each file load operation, which adds to the latency.

As mentioned above we want to provide cache implementation only for phase 1 Font File enumeration of DirectWrite. In our experiments we observed that when calling ReadFileFragment for the same file such as arial.ttf in various runs, DirectWrite actually asks for same offset and chunk sizes. If we cache these offsets and chunk sizes into single file during this enumeration phase then we may avoid loading of all these font files at least during the startup. In second phase we are little less worried as the it is very unlikely that any webpage or application in renderer ends up loading all font files simultaneously. In our experiments we saw maximum of upto 3-4 font files loaded in phase 2.

For Cache implementation we plan to go through DirectWrite font file enumeration noting down all offsets and chunk sizes along with actual chunk bytes in Cache File. We run this process either through Chrome Browser or Chrome utility process. In our experiment we found that for some files like simunb.ttf, DirectWrite ends up asking for entire file after first few chunks. To avoid caching whole file simsunb.ttf (~16MB.) We will check on percentage of total file to be cached against preset limit such as 70% (Histogram of total fonts with respective cache sizes) and only allow caching chunks if criteria satisfies. During actual enumeration inside renderer we will always supply alternative path (That is of direct loading from disk) for any font file that is asked by DirectWrite during enumeration which is not present in our cache.

We will store this cache file under user profile folder. We will have to provide mechanism to check for consistency of the file using either checksum or write completed mark. Once cache file is created browser process will open this file during initialization and map into a shared memory section accessible in read only form to all renderers. Renderer will first try to open the section for font cache during enumeration process. If unable to find the section renderers will fall back to old font file loading path.

As briefly mentioned above, through ReadFileFragment function of FontFileStream, DirectWrite reads various data segments inside font file. In our experiments these segments overlap each other. Sometimes DirectWrite keeps querying several subset of a segment which it read in some previous call. In our caching strategy we wait for all these segments to be read and keep track of these offsets and length pairs as DirectWrite reads font file. For an example look at sample log of following segments that it read for arial.ttf font file in our trials.

During closing of this font file, we fold/merge all these chunks of segments so to create unified caching segments. As could be seen in Figure 1, there are several segments that start from offset 0 and are of various sizes, also there are some segments which extended already encountered segment because of overlap. In Figure 1, segments numbers 2 to 4 are all complete subsets of segments number

Figure 2: Shows how the segments get folded/merged while caching.

During read phase we check if requested segment lies within boundaries of cached segments and provide data for request from cache.

magic_completion_signature: Contains specific value which indicate that file has been fully written. This is to minimally ensure consistency of the file. Current value is 0x454E4F44, which denote ascii letter ‘DONE’

undefined: Some extra space to accommodate for future addition of fields into this file.

CacheFileEntry is entry per font file. e.g. arial.ttf and arialb.ttf will have two separate entries.

start_offset: Contains starting offset within original file that was asked by DirectWrite during enumeration in call to ReadFileFragment.

length: This contains value from fragmet_size parameter of ReadFileFragment, which as passed by DirectWrite during initial enumeration.

BYTE blob[]: This is just a place holder. What follows each CacheFileOffsetEntry record is actual blob of data that was returned to DirectWrite during initial enumeration. This blob should be copy of exact contents of original file such as arial.ttf or times.ttf.

** Our assumption here is that no font file has duplicate record in our cache.

** Another assumption is that if for some reason we find font file cache invalid, we just recreate it instead of repairing it.

Internally cache is represented by a map of font file name to a list of data segments cached from that file. Here in the list we just store start, length and pointer inside original cache file, which is memory mapped.

Following histogram shows frequency of fonts on a typical Windows 8 system in reference to their respective cached size. Here we are referring to respective cache size as total number of bytes that need to be present in cache file compared to original font file. 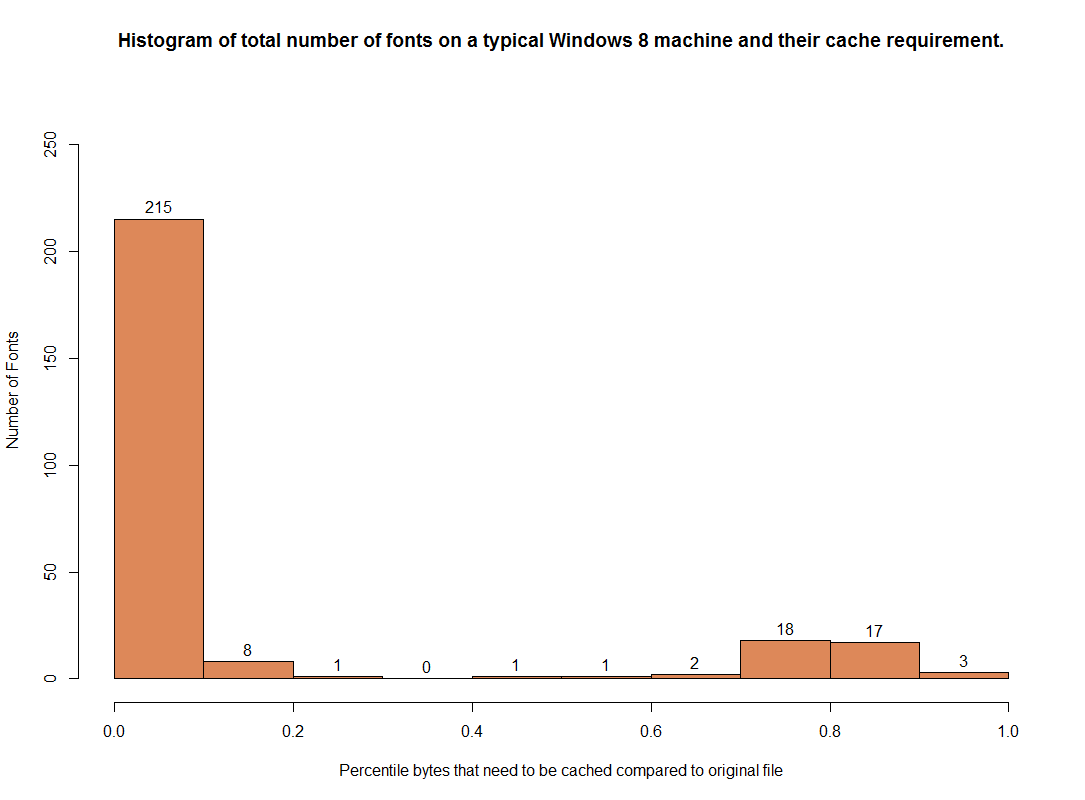