This document explains how sensor APIs (such as Ambient Light Sensor, Accelerometer, Gyroscope, Magnetometer) based on Generic Sensor API are implemented in Chromium. This document describes the Generic Sensor API implementation on both renderer process and browser process sides, it also describes important implementation details, for example how data from a single platform sensor is distributed among multiple JS sensor instances and how sensor configurations are managed.

At the time of writing following specifications were implemented in Chromium under “Generic Sensor” feature flag.

Avoid the code duplication and thus simplify maintenance and development of new features.

Please note, that the fetched sensor data is not passed to JS bindings via mojo calls - shared memory buffer is used instead, thus we obviate bloating of mojo IPC channel with sensor data (for sensors with continuous reporting mode) when platform sensor has high sampling frequency and also avoid bringing of an extra latency.

GSF component diagram is shown on figure below:

The class diagram of Generic Sensor device component is shown below. All classes act on IO thread, except if documented otherwise. 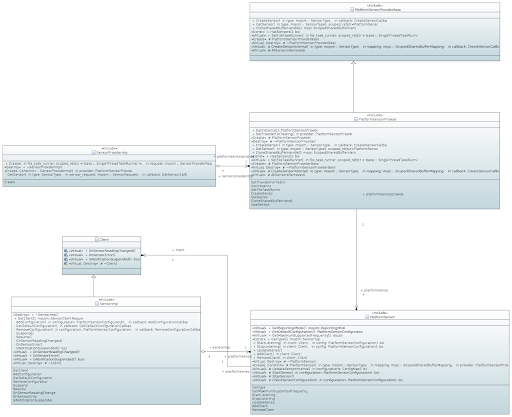 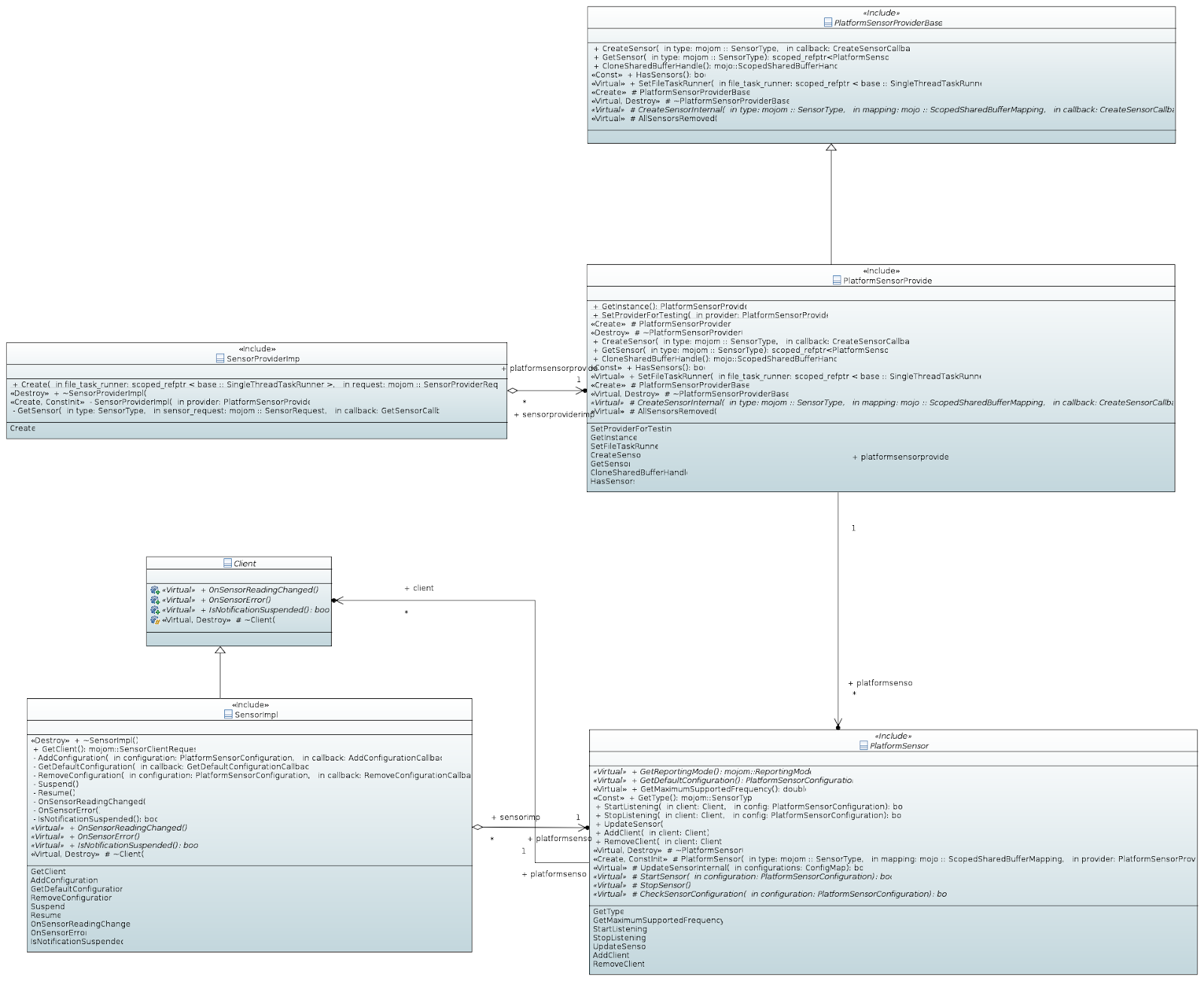 PlatformSensor represents device sensor of a given type, there can be only one PlatformSensor instance of the same type at the time, its ownership is shared between existing SensorImpl instances. PlatformSensor is an abstract class which encapsulates generic functionality and is inherited by the platform-specific implementations (PlatformSensorAndroid, PlatformSensorWin, ...).

Blink side class diagram is shown below. 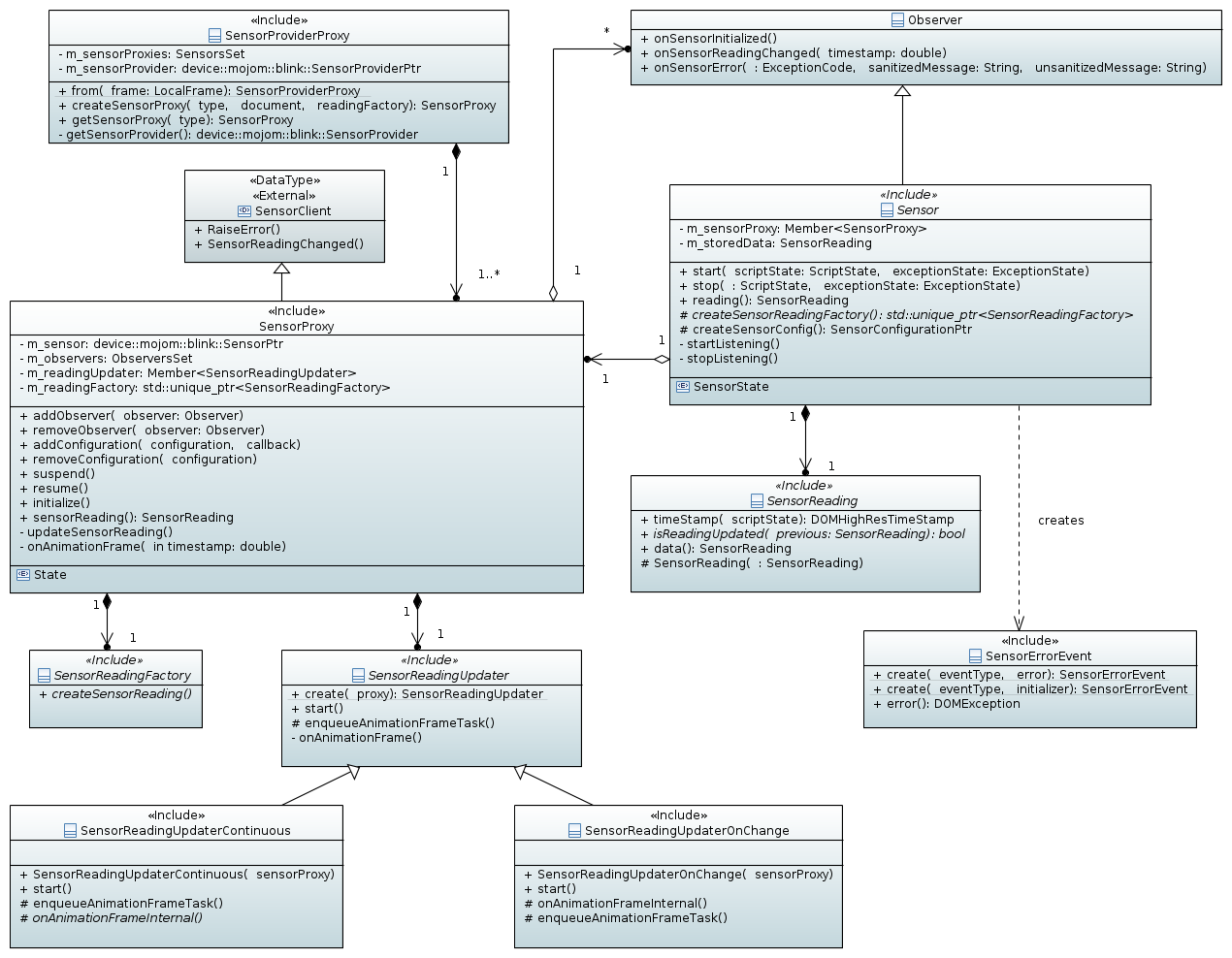 Sensor - implements bindings for the Sensor interface. All classes that implement concrete sensor interfaces (such as AmbientLightSensor, Gyroscope, Accelerometer) must be inherited from it.

SensorReading - implements bindings for the SensorReading IDL interface. All classes that implement concrete sensor reading interfaces (e.g. GyroscopeReading) must be inherited from it.

SensorProxy wraps the mojom::Sensor mojo interface proxy and itself implements mojom::SensorClient interface. It provides nested SensorProxy::Observer interface which is inherited by Sensor class in order to receive notification from platform side.

SensorProxy contains the SensorReading instance which is shared between all Sensor instances inside the frame.

This paragraph describes the implementation of logic behind Sensor.reading update and sending of Sensor.onchange event. The issue here is that relationship between device sensor and corresponding JS sensor instances is one-to-many, and each JS sensor instance may have different configuration.

In GSF the resulting configuration which is applied to the device sensor is the highest from the currently existing JS sensors configurations. The following object diagram illustrates these logic with example of four sensor instances of the same type and they have different sampling frequencies: 1Hz, 50Hz, 10Hz, 20Hz.

Note: the given sampling frequency value is capped to 60 Hz for security reasons, that are explained in “Security and Privacy” section of this document.

On platform side (in generic_sensor component) sensor configurations are managed inside PlatformSensor class.

On Blink side, for ‘continuous’ reporting mode, SensorProxy continuously updates the stored reading instance from shared buffer using periodic timer and then notifies all dependent Sensor instances that sensor reading has changed. Further, Sensor instance may send ‘onchange’ event considering its own frequency and based on the timestamp delta between the newly arrived reading and the one that had been previously send.

For ‘onchange’ reporting mode the behavior is a bit different: SensorProxy updates reading from shared buffer, however, unlike the ‘continuous’ reporting mode case, it does not do it all the time. Reading updates start after ‘SensorReadingChanged()’ mojo call and continue for the period of time equal to

where Fmin is the minimal sampling frequency from the currently present Sensor instances, in the example above it would be 1÷1Hz =1s. 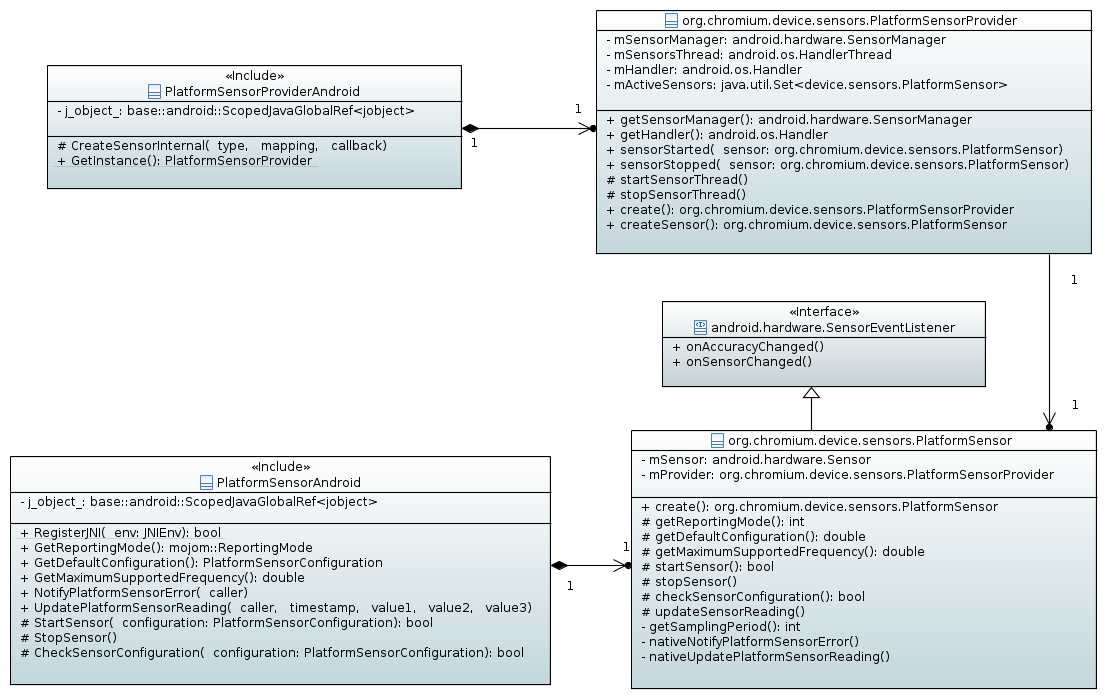 The PlatformSensor java object implements SensorEventListener interface and owns Android Sensor object. The PlatformSensor adds itself as a event listener for a Sensor to receive sensor reading updates and forwards them to native side using native* methods. 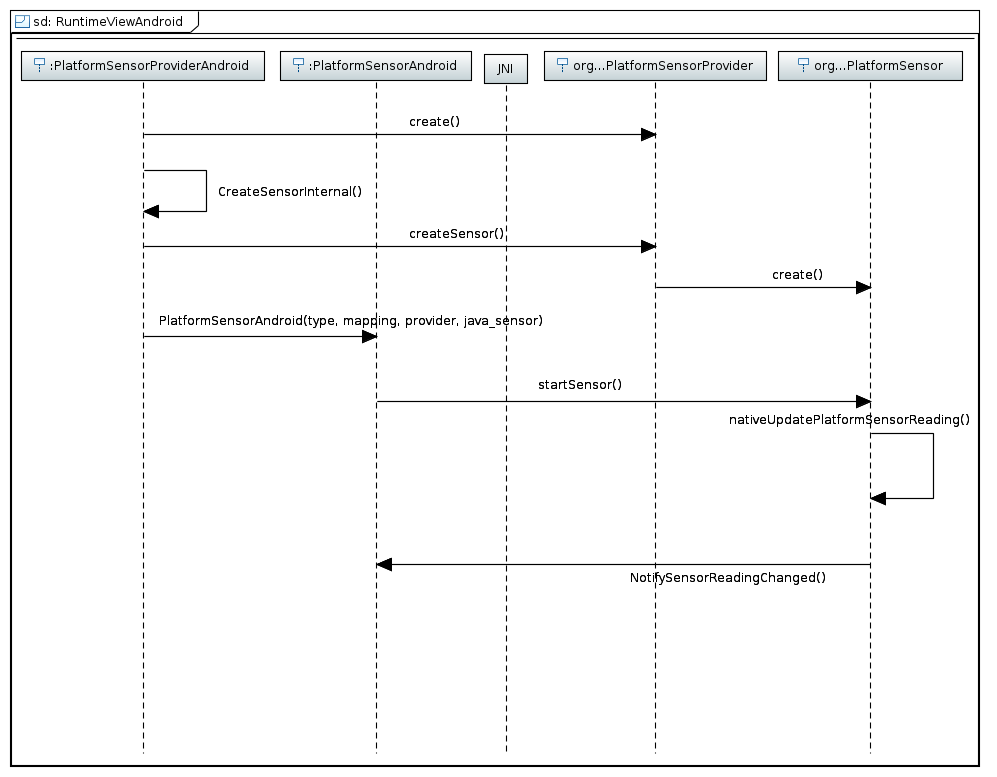 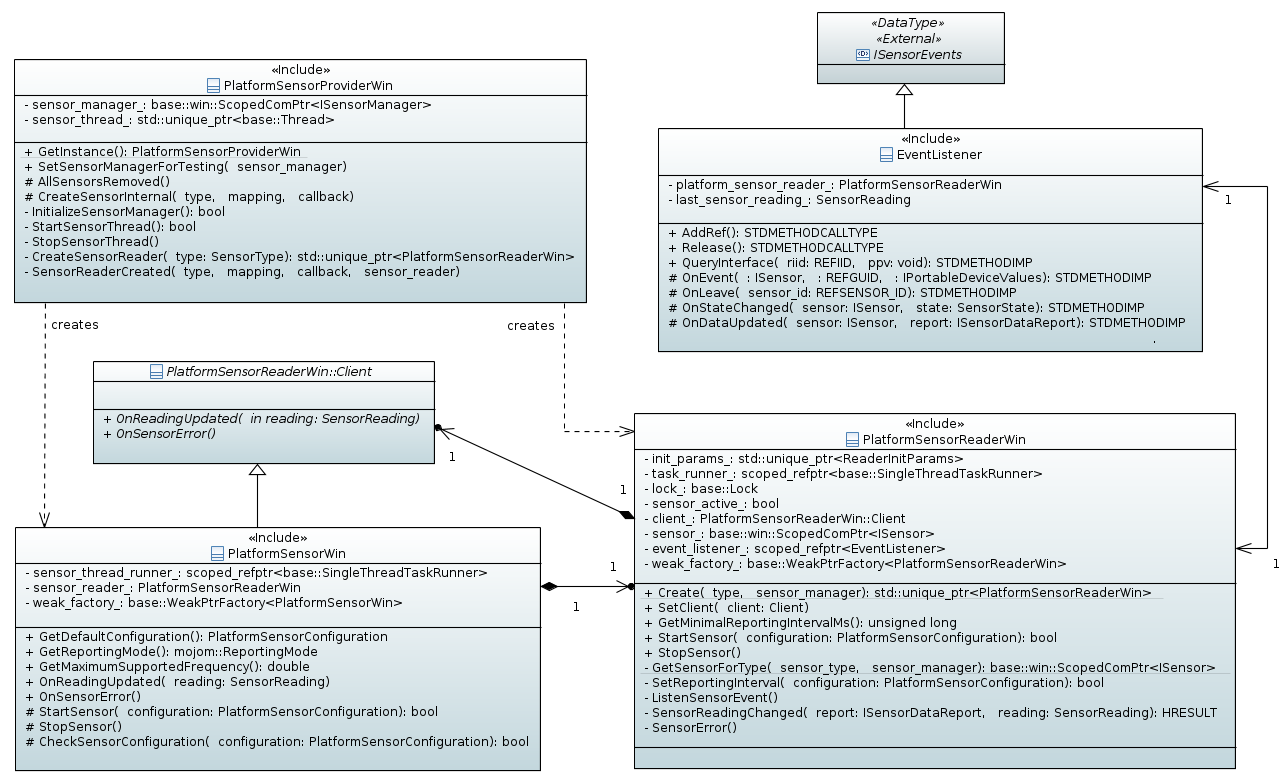 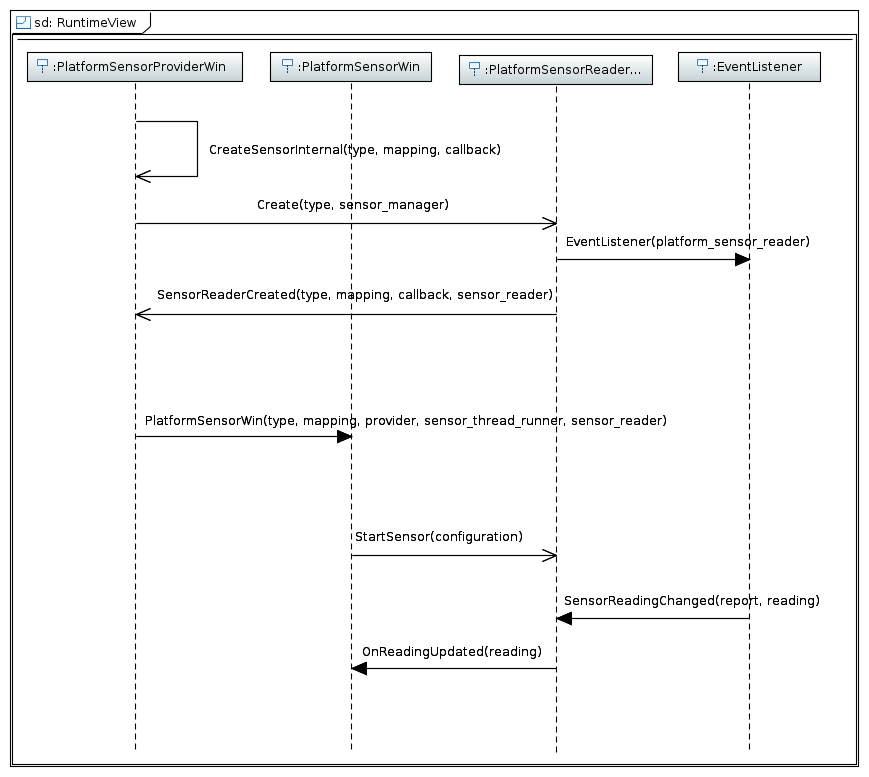 Implementation on Chrome OS and Linux

ChromeOS (CrOS) and Linux Operating Systems (OS) share the same code base except for some auxiliary data structures, which are used to read sensor values in a right order and in accordance to Generic Sensor API specifications, and functions, which are used to apply scaling value, offset value and other values to keep readings in single units of measurement.

Our implementation is using sysfs for both CrOS and Linux platforms. The problem with the device node interface is that it requires device nodes to be accessible not only by root but by a user without root rights, who runs Chromium or Chrome browser. While the mentioned problem concerns only Linux distributions, CrOS involves another problem - data cannot be read by multiple clients simultaneously, which is true for Linux platform as well. As far as we know, there is an AccelerometerReader that uses this interface to read accelerometer data for CrOS specific components in the browser. To be more precise, the interface uses a ring buffer, whose values are erased after reading happens or buffer is full. If there are two simultaneous clients trying to read from the same buffer, both of them will miss data which will cause performance and reliability issues. There is a new feature in the latest kernel - two and more simultaneous reads can be done for the same device node interface, but this feature is still in staging. 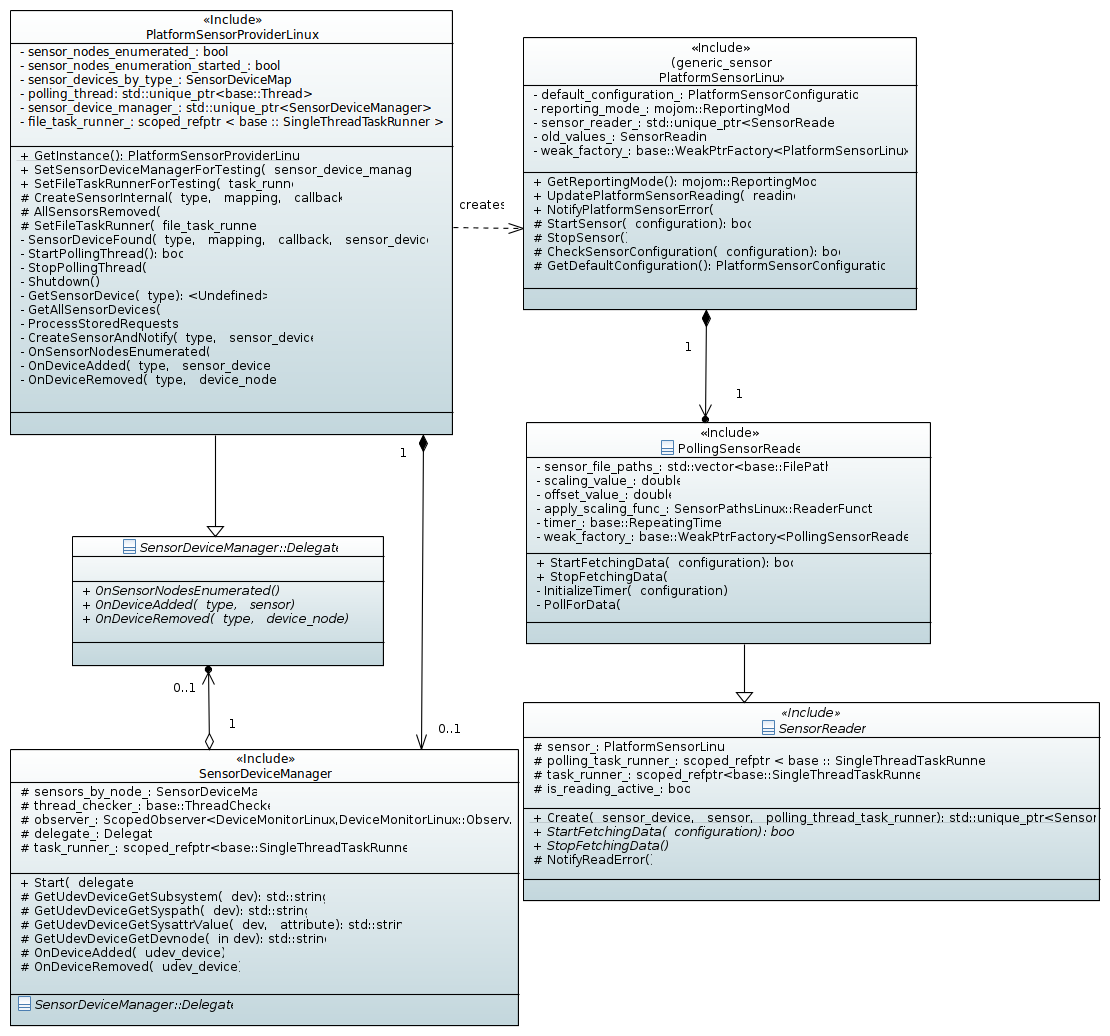 PlatformSensorProviderLinux is a singleton class that processes requests for new sensors. It uses composition and holds a unique pointer to a SensorDeviceManager object, which sends notifications about added and removed iio sensors back to it using a Delegate pattern. The PlatformSensorProviderLinux has a SensorDeviceMap cache, which is an unordered map that stores a pair of a mojom::SensorType key and a std::unique_ptr<SensorInfoLinux> structure, which represents a structure of an existing iio device. The structure’s members will be discussed further along with the implementation of the SensorDeviceManager.

The SensorDeviceMap is a cache, which is used to store type to structure pairs of all known IIO sensors provided by an OS and is used to create sensors of requested types. When a request for a specific type of sensor comes (PlatformSensorProviderLinux::CreateSensorInternal is called), the provider checks if the SensorDeviceManager has been started and enumeration has been done. If not, the provider starts the manager and waits until it enumerates all iio devices available to create PlatformSensorLinux sensors asynchronously, otherwise the provider checks if it has a SensorInfoLinux for a specific sensor type in its cache. Then it creates a platform sensor passing SensorInfoLinux to it, which will use the structure to set own frequency, reporting mode and then passes the structure to a SensorReader created by that sensor.

Once enumeration is done, the provider starts to process stored in std::vector<mojom::SensorType> requests according their types by enumerating own cache and looking for a SensorInfoLinux structure that represents the requested type of a sensor.

As previously said, the PlatformSensorLinux creates a SensorReader and passes a SensorInfoLinux structure to it. The reader has a static factory method SensorReader::Create, which creates a PollingSensorReader (we will implement triggered sensor reader, which will use the device node interface in the future once all problems regarding this reading strategy are resolved). The reader uses the SensorInfoLinux structure and stores sysfs paths, which are used to read iio sensor values, offset value, scaling value and a functor - SensorPathsLinux::ReaderFunctor, which is used to apply scaling and offset values and invert signs if needed. A base::RepeatingTimer is used to instantiate readings using a frequency provided by a PlatformSensorLinux.

connected/disconnected devices. When the manager is started, it adds itself as an observer to the LinuxDeviceMonitor and asks to enumerate devices. During enumeration, the provider gets notifications about found sensors and updates its cache. 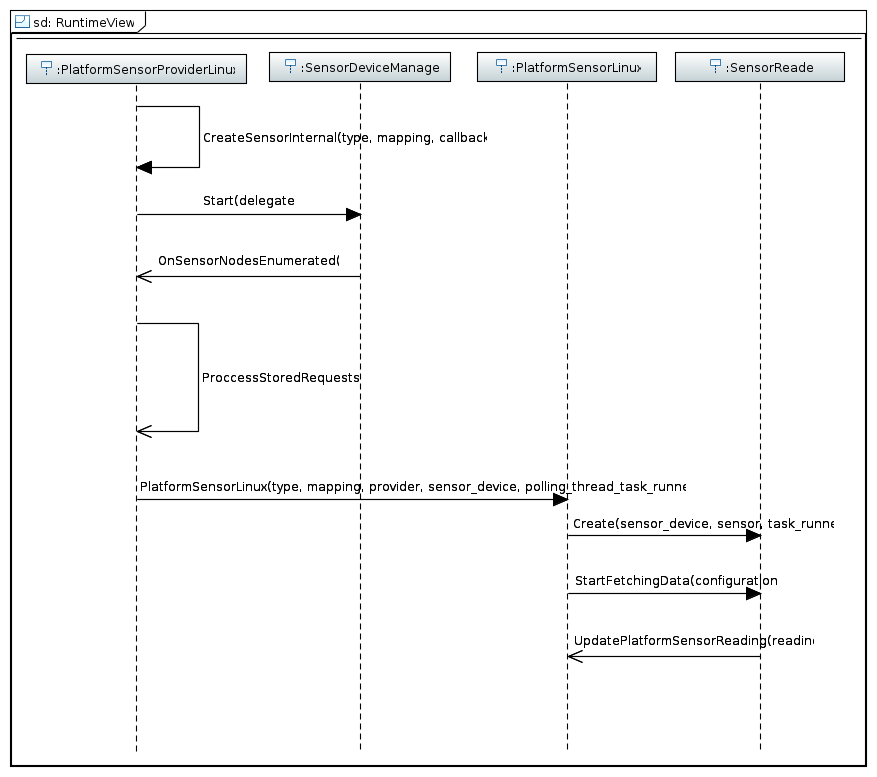 The threading model differs from other Generic Sensor API’s platform implementations. Three threads are used to preserve Chromium or Chrome fast and responsive. Those are an I/O browser thread, a browser file thread and a custom polling thread.

The implementation for Mac platform consists of two classes: PlatformSensorProviderMac (singleton) and PlatformSensorAmbientLightMac. The reason of a precise naming of the sensor class is that the platform has only ambient light sensors embedded into hardware.

PlatformSensorAmbientLightMac utilizes IOKit to get information from the platform and callback

when the value of the sensor is changed. In order to get a right callback notification, IOServiceAddInterestNotification is used. 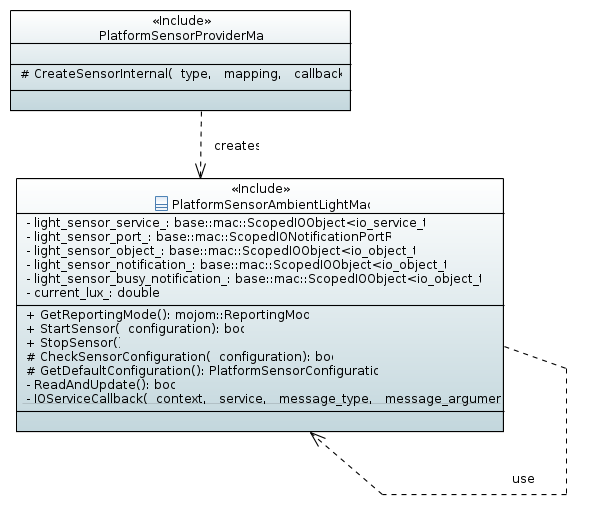 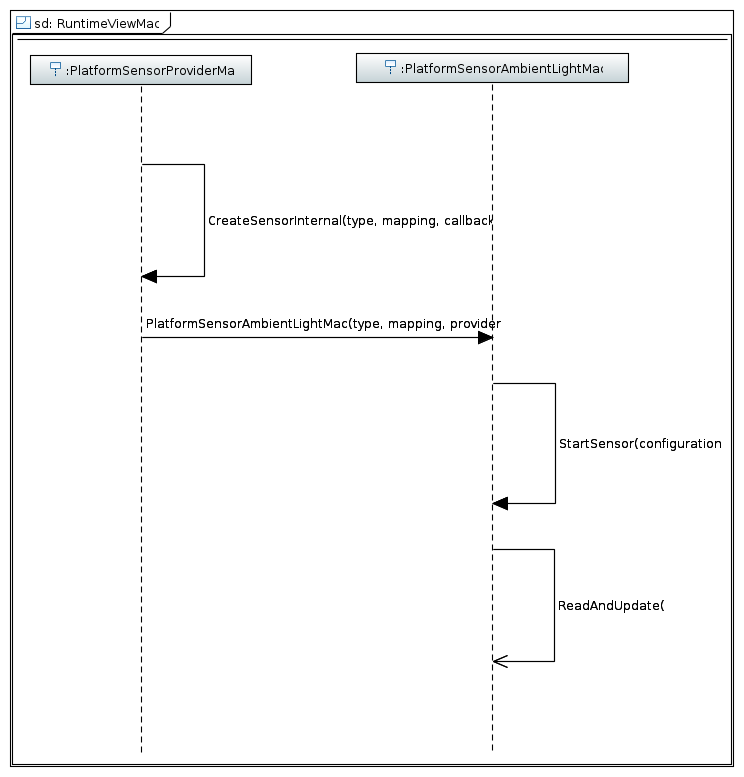 Generic Sensor implementation in Chromium is using Permission mojo service to obtain permission from the user.

In order to avoid privacy information leakage, sensors that might expose privacy sensitive data must be protected by permission system and maximum allowed polling frequency should capped to complicate ‘gyrophone’ [1] or keylogger [2,3,4,5] type of attacks.

The ambient light sensor is prone to keylogging attacks [5], therefore, must have separate permission token, so that UA / web page is able to control access to data provided by the sensor. The data could be rounded to its integer part and only illuminance values returned to the users of the API without exposing RGB data. Also, ambient light sensor might be used to track what end-user is watching at the moment on the TV or tell whether user has moved from one room to another.

The accelerometer and gyroscope sensors might be used for keylogger type of attacks [2,3,4] or, for example, identify users by walking patterns, therefore, must be protected by separate permission token.

The magnetometer sensor provides information about magnetic field and in theory, can expose location of a user. For example, attack vector could be pre-magnetized surface in a particular location, or mapping between location and constant magnetic field disturbances caused by the building. Due to non-uniform strength of the Earth’s magnetic field, another attack vector could be exposure / validation of user location. For example, if end-user is connected through VPN, magnetic field associated with GEO IP information can be compared with magnetometer readings at real location, therefore, tell whether user is using VPN or not.

Orientation sensor that provides quaternion or rotation matrix data is a fusion sensor that uses accelerometer, gyroscope and optionally magnetometer. It fuses data from different sources, therefore, it is difficult to reconstruct original data provided by low-level sensors. Research paper [6] indicates that orientation sensors can be used for keylogger type of attacks.

To avoid out-of-band communication between different origins, actual polling frequency is not exposed to JS objects.

Discussion of past issues discovered in Blink’s Device Orientation and Motion APIs is here, we believe they are all addressed by the above mitigations.

Given the privacy and security risks described above the most sensitive data is fetched from the low-level sensors (accelerometer and gyroscope in particular), therefore access to these sensor interfaces is better to be protected with permission mechanism.

The site settings UI could contain single option entry dedicated for sensors. The user might forbid access, thus disabling sensors that are under ‘opt-out’ group. If the default permission policy for particular sensor is ‘ASK’ web page could request permissions using Permission API, thus, triggering permission dialog. Therefore, localized strings and possibly icons would be required for the UI. 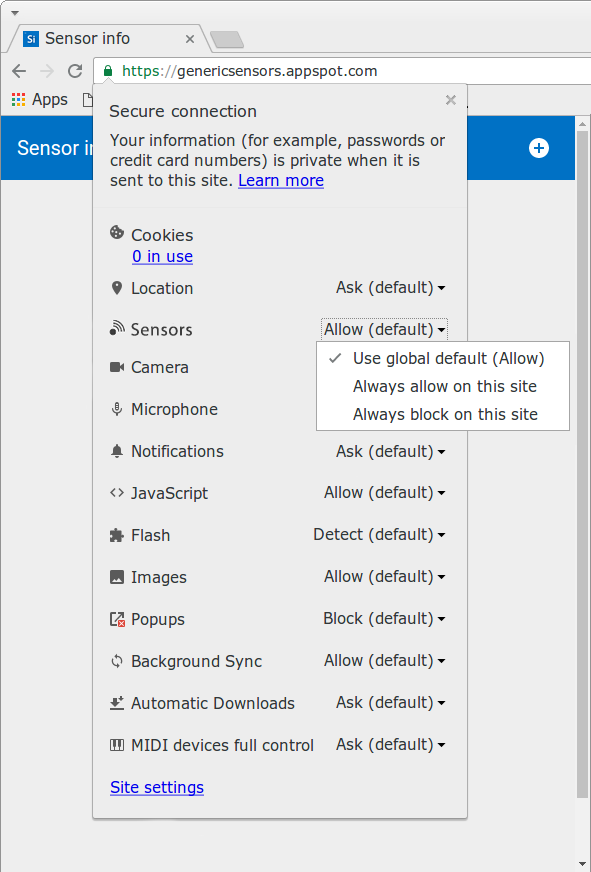 If “always block” is selected by the user, Chrome should (options): 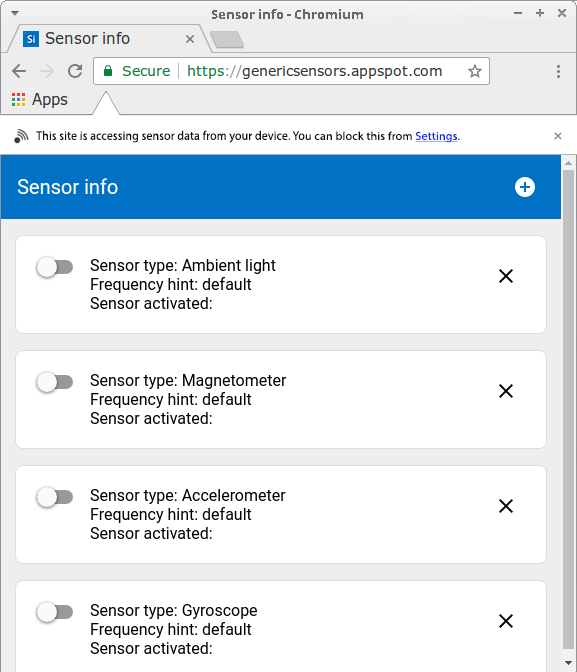