A Generic theme for the Test Shell

When running layout tests, we'd like to minimize the differences we get between platforms, so that we don't have to maintain a large number of different baselines. The best example of this is on Windows, where different versions of Windows can render form controls and other widgets differently depending on your desktop settings (classic mode vs. XP theme vs. Vista theme vs. Aero, etc.).

The new generic widgets are rendered using Skia and are designed explicitly for testability (rather than aesthetic concerns). Each widget is drawn differently depending on which state the control is in (disabled, readonly, active, hovered, etc.), and each widget is drawn differently from each other (e.g., the upper part of the scroll bar and the lower part of the scroll bar are distinctly different). This is different from what you might do when design real widgets for users, because you might actually want different widgets to look the same. In this case, we'd rather catch programmatic errors like passing the wrong widget ID or the wrong state in.

This image gives you an idea of what all of the "generic" controls look like: 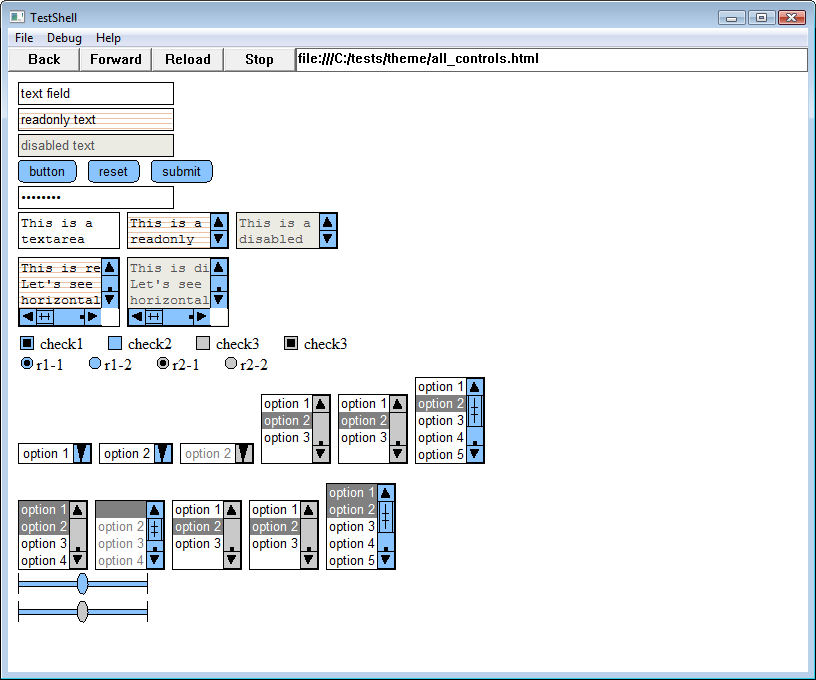 As you can see, it's none too pretty, but it's quite clear what's what. Some of the things to look for:

This code is currently windows-specific, only because it implements the WebThemeEngine interface (as found in src/webkit/api/win ). We could certainly genericize this further and use the same theme on other platforms (Mac, Win), with the same tradeoff (we would test less of the actual production code).