Rendering and compositing out of process iframes

This document provides a design for rendering and compositing out-of-process iframe (OOPIF) elements.

This is in support of the main OOPIF design work, for which a higher level description can be found at http://www.chromium.org/developers/design-documents/oop-iframes.

A very brief primer on Blink rendering and painting

When an HTML resource is loaded into Blink, the parser tokenizes the document and builds a DOM tree based on the elements it contains. The DOM tree is a WebCore data structure that consists of objects with types that inherit from WebCore::Node.

As each node is added to the DOM tree, the attach() method is called on it which creates an associated renderer (an object with a type that inherits from WebCore::RenderObject) and adds it to the render tree. Objects in the render tree roughly correspond to objects in the DOM tree, but there are many exceptions (some DOM nodes do not receive renderers, some will have more than one renderer, and many renderers are created that that do not have corresponding DOM nodes). The render tree is the primary data structure involved in the layout phase of rendering, during which size and position are computed for all rendered elements.

During construction or modification of the render tree, some renderers will receive associated WebCore::RenderLayer objects. Attaching a RenderLayer to a RenderObject indicates that the renderer has its own coordinate system, and therefore the content of the renderer and its descendants can (but won’t necessarily) be painted to a separate compositing layer. Each RenderLayer is added to the RenderLayer tree, which has a sparse association with the render tree and is the primary data structure used for the painting phase of rendering.

The diagram below provides a basic illustration of the DOM tree, render tree, and RenderLayer tree for the following HTML:

More details on rendering, and in particular the layout phase, can be found at https://www.webkit.org/blog/114/webcore-rendering-i-the-basics/.

RenderLayerBacking in turn corresponds to a GraphicsLayer, the glue between WebCore rendering and platform compositing, instantiated in our case as GraphicsLayerChromium. GraphicsLayers are positioned into yet another sparse tree, this one used by the compositor.

A little bit about compositing and the GPU

A GraphicsLayer internally manages a WebLayer, which is a compositor container for a shared memory buffer between a renderer process and the GPU process. During the painting phase, each RenderLayer instructs all of its associated RenderObjects to paint into the WebLayer buffer. The GPU process can output the bitmap texture to the screen.

Details of how the different processes synchronize buffer usage and throttle rendering vary significantly by platform. The GPU often uses a double buffering system, in which two buffers are shared so that one buffer is being output to the screen while the other is being painted. When a paint is complete, the renderer issues a swap buffer command to the GPU to cause it to swap which buffer is being displayed, and which is available for paint. The renderer sends an IPC to the browser when a new buffer is available and expects an ACK for every such message. This ACK contains a previously sent buffer to be reused by the GPU and a sync point (location in the GPU command buffer), or a NULL buffer, if nothing is available to be recycled. Sync points are used to make sure the same buffer isn’t being rendered into and drawn out of. When an embedding compositor issues the last draw call that uses the child renderer’s image data to the GPU command buffer, it also inserts a sync point into the command stream and sends an ACK to the renderer with that number. Rendering into the recycled buffer is only allowed after the GPU processed all commands up to the sync point. Rendering is suspended until that happens.

The compositor uses a TextureLayer to encapsulate textures that need to be shared between different processes. It also provides a management facility for TextureLayer in TextureMailbox, which conveys ownership of the texture between processes. One process can make a texture available to another process by using the glProduceTextureCHROMIUM GPU command buffer API for the appropriate mailbox, and then the next process takes ownership of the texture via the glConsumeTextureCHROMIUM GPU command buffer API on the same mailbox.

Most of this information, and much much more, can be found at http://www.chromium.org/developers/design-documents/gpu-accelerated-compositing-in-chrome.

The ubercompositor is being developed to improve rendering performance on Aura, by integrating compositing of UI and web content in the browser process. Under the new architecture, child compositors in each rendering process supply compositor frames to the parent compositor which are then composited into the screen for display.

Each CompositorFrame contains a set of quads and associated texture references that are generated by a child compositor in a renderer process. Internally, TextureMailboxes are used to transfer textures to the browser process.

The full security advantage of OOPIFs is very difficult to achieve when the compositing of a browser tab’s contents is done by a renderer process, because the ability to use a texture in compositing implies read access to the pixels of that texture (see the Cross Site Texture Stealing section below). Therefore the primary design assumes the availability of ubercompositor. A prototype has been built using conventional hardware path compositing, and we are maintaining that parallel design with the expectation that we will want OOPIFs to be available on platforms without ubercompositor availability, despite the significantly reduced security properties.

The following list enumerates the requirements for OOPIFs to paint:

When using hardware path compositing without ubercompositor, the renderer process for the out-of-process frame creates a TextureMailbox. A RenderWidgetHostViewSubframe object in the browser process passes the mailbox name to the top-level frame renderer. This is illustrated in the diagram below. The right half of the diagram is mainly existing functionality that will require few changes. The left half contains some new and modified classes as well as new IPC messages. 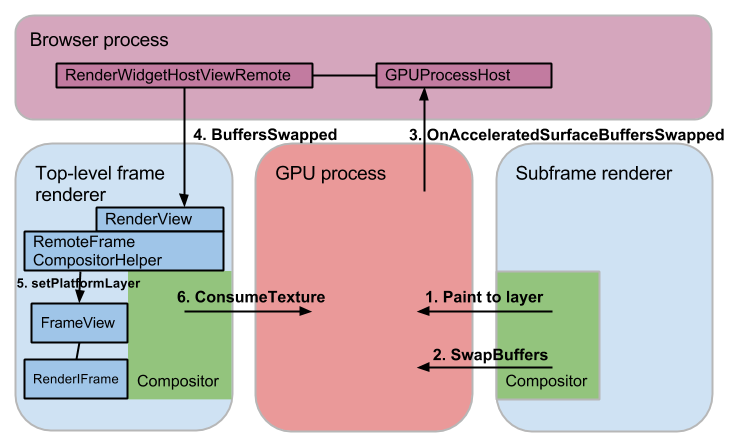 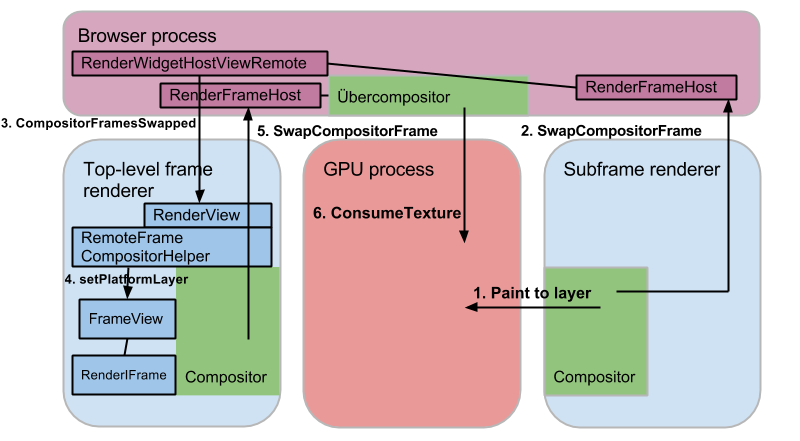 Relevant changes to the representation of pages and frames in the browser process are described at http://www.chromium.org/developers/design-documents/oop-iframes.

Each ViewHost_* message will be passed through the RenderWidgetHostView for its associated RenderFrame. RenderWidgetHostView will use the WebContents to send the message to the destination RenderFrame (for messages originating from a subframe renderer, this is the top-level RenderFrame; for messages destined to a subframe renderer, this will use GetRenderManager()->current_host()) and then dispatch the message to the proper recipient.

RenderView registers handlers for the new ViewMsg_BuffersSwapped IPC message (in hardware path compositing) and ViewMsg_CompositorFramesSwapped (for ubercompositor). This handlers lazily instantiate a SubframeCompositorHelper object and proxies most of the handling to the helper. The new IPC messages convey information such as size, TextureMailbox name, compositor frame data, and GPU routing information for the texture with the swapped out frame contents that was rendered by another process.

SubframeCompositorHelper is a new class that is responsible for managing the TextureLayer and DelegatedRendererLayer information associated with a swapped out frame. It is attached to the WebKit::RenderFrame for an out-of-process frame, and is created upon receipt of a ViewMsg_BuffersSwapped or ViewMsg_CompositorFramesSwapped IPC message. It performs the following tasks:

WebCore itself requires few modifications related to rendering. The main change is that for any cross-site iframe element, its associated RenderIFrame must always have a RenderLayer and RenderLayerBacking created. This can be accomplished by modifying RenderPart::requiresAcceleratedCompositing() and RenderIFrame::requiresLayer() to return true. Additionally, RenderCompositor::requiresCompositingForFrame(), which decides whether to create a new compositing layer for a frame renderer, must always return true for OOPIFs.

RenderIFrame, since it inherits from WebCore::RenderWidget, contains a pointer to a WebCore::Widget. The m_widget on any RenderIFrame should always point to a FrameView. SubframeCompositorHelper attaches the layer to the FrameView to make it accessible during rendering: RenderCompositor accesses the WebLayer via FrameView::platformLayer() and assigns it as the content for the frame’s RenderLayerBacking. Once this is done, the compositor will display the frame texture in the correct position.

An important security requirement for OOPIFs is that even though cross-site frame contents are being composited with the content in the top-level frame, the top-level renderer process must not be able to read the pixels that are drawn within the frame. The ability to do this would allow a compromised renderer process access to cross-site content, which is contrary to the goals of the site isolation project.

We don’t believe this to be a feasible goal without the availability of ubercompositor. It would be very difficult, given the performance constraints of compositing, to require that the top-level renderer process be able to composite using a given texture without being able to write that texture to an accessible memory buffer. In the ubercompositor model, compositing is done by the trusted browser process so this constraint no longer .

Access to the texture from a parent renderer process will be prevented by the GPU process, where a check will be added to the handler of the glConsumeTextureCHROMIUM command buffer API so that a TextureMailbox can be consumed only by the renderer process that initially created the texture, and by the browser process.

OOPIFs will not be supported when software path rendering is enabled. Software compositing, when it becomes available, will allow OOPIFs to function on systems with graphics driver that do not support hardware-based compositing, but this will have the same security limitations as OOPIFs rendered under current hardware path compositing, which does not prevent cross-site texture stealing.

Ubercompositor is limited to running on Aura, which currently only runs on ChromeOS. We expect Aura to be running on Windows and Linux before OOPIFs are enabled on stable without a flag. Until Aura is also ported to OS X, our implementation will rely on the current hardware-accelerated compositor and the software compositor.