A feature in Chrome to let users see their printer output before sending it to the printer.

Web pages are generally designed to be displayed on a computer screen and are not always optimized for printing. When a web page gets printed, the browser has to reformat the page to fit the physical constraints of the paper media. The web page printed to paper may look very different from what users see on the screen. Thus users need to be have a print preview feature in order to verify their print jobs before sending them off to the printer, so they do not waste consumables like ink and paper. As of October 2010, all major browsers have a print preview feature which lets users see what their print jobs will look like. The only exception is Chrome. The current implementation of printing in Chrome pops up a native printer selection dialog, where the user can select a destination printer and change printer settings. Once the user selects print from the native printing dialog, Chrome generates a print job and sends it off to the printer. Overview For print preview in Chrome, the plan is to display the print preview in a new tab which is a DOM UI page. The print preview page will consist of a left pane that allows for printer selection and printer options, and a right pane for displaying the preview as well as page thumbnails.

To generate a preview that most closely resembles what will be printed, Chrome will generate a PDF document to be sent to the printer and display it as the preview. Chrome will leverage the existing PDF plugin it ships with to render the PDF to screen.

Users should be able to select print as they currently do with the wrench menu, renderer context menu, and shortcut key to bring up a print preview tab. In the print preview tab, the left pane will have a drop down list to select printers that are currently available through the native print dialog. Below the printer selection drop down is a list of commonly used options, including the pages to print, the number of copies, and portrait/landscape modes. A ‘More options’ button expands the options list to show advances options when clicked. As the user adjusts the options, the preview on the right updates to reflect the new options the user selects. When the user finishes previewing, the user can hit the print button to print the document or the cancel button to exit the print preview. In addition, there will be a button so the user can access the native print dialog. TODO(UI) - figure out details.

There is ongoing work to implement a PDF backend for Skia. This backend will enable Chrome to render web pages to consistent and size-efficient PDFs on Windows and Linux, which have no PDF generation capabilities and poor PDF generation capabilities, respectively. Mac OS X already has a high fidelity PDF backend built-in. There is ongoing work to improve the PDF plugin with additional features like page thumbnails.

The print preview feature consists of both frontend work to provide the desired interactive user experience and backend work to generate the PDF and talk to the printers. Another area to consider is persistent on disk data. 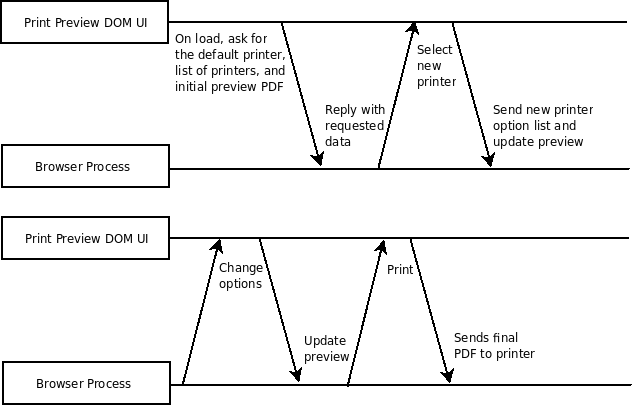 The frontend also embeds a PDF plugin to display the preview. The browser generates the PDF and make it available to the print preview UI via a special URL, i.e. chrome://print/foo, so the UI just needs to create <embed> tag with the appropriate src parameter. The front end also needs to communicate with the PDF plugin to keep the list of pages to print in sync with the thumbnail selection inside the plugin. The DOM UI will communicate with the plugin via a Pepper API. TODO(thestig) talk to PDF plugin folks about interfacing with the plugin.

The backend code in the browser process needs to do the heavy lifting to support all the requests coming from the front end. To start, the browser process needs to get the list of printers and printer options using platform specific APIs. Cloud print already has code to generate html options code from a PPD/XPS, which is useful here. Though to make this work on Windows XP, which does support XPS, the browser also need to be able to query for common options from printers. The majority of the work in the backend involves restructuring the messy printing pipeline to support preview. The current Linux printing pipeline works differently from Windows and Mac. Once all the platforms are brought in line, the printing pipeline needs to be broken up into two pieces: PDF generation and printing. The current printing pipeline waits for the user to select a printer before generating the print output using platform specific code and sending the output to the printer. The actual printing process uses pipelining: the renderer generates printing metadata one page at a time, so it can generate them while the PrintJobWorker in the browser process sends them to the printer at the same time. 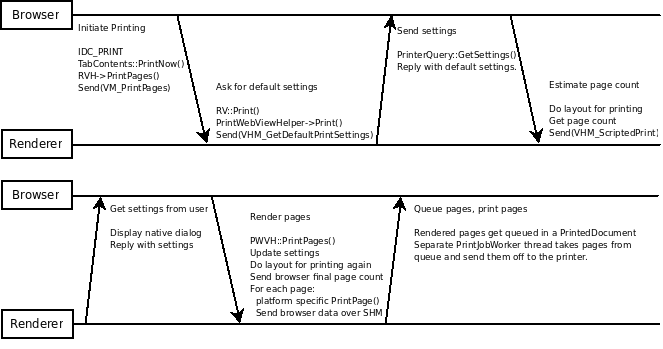 In the printing work flow for print preview, the renderer needs to retrieve the current printer settings, generate a PDF, and send the PDF to the browser. On the browser side, it just displays the PDF and wait for users to tweak the printer settings, after which the browser would ask the renderer to generate a new PDF for previewing. This process repeats until the user finishes with preview, after which Chrome sends the final revision of the PDF to the printer. Whether this should be done directly or by ask the plugin to do it through parts of the existing printing pipeline remains TBD.

Points to consider are:

The print preview feature may need to save user settings for printers to disk so they persist between print jobs. I.e. it would be annoying to have to set the printer to landscape, black and white, with options foo and bar every time a user printers. These user preferences should be stored in a new database specifically for printer settings. This is a better alternative to storing the data directly in the preferences file. A user with many printers can generate lots of printer setting data that can potentially make the preferences file much bigger. This impacts start up time since Chrome needs to load the preferences file on start up, even though the printer settings are not used until much later. The proposed database will contain a table for global print preview settings, like the most recently used printers. It will also have a table for printer settings, where the columns are printer name, setting name, and setting value. Printer name and setting name should together form a unique key. In memory, the representation will be the same as cloud_print::PrinterBasicInfo’s options variable.

TODO / does the left pane need to be flipped around for RTL languages? Other i18n issues?

The initial version of print preview will only work with printers exposed by the OS. To integrate with Cloud Printing, Chrome will need to query for cloud printers in additional to local printers via the cloud printing APIs. Assuming print preview uses the same code as the cloud printer server to parse PPD/XPS files and display options, Chrome just need to get the printer info (PPD file) and available/default paper sizes. With these two pieces of data, Chrome can generate the option dialog and preview on its own. When the user hits the print button, Chrome will simply send the PDF to the cloud print server instead of to a local printer.