Why Caching is Important in this Case

The internal indexes for the HQP can take some time to build from scratch. This is done by querying all records in the the URL visit history database. Instances of this database have grown to have tens of thousands of entries reaching over 100 MB in size. Building the HQP indexes at startup from such a large database would delay the availability of this feature noticeably and would have a noticeable impact on the responsiveness of the browser.

Initially, Pickle was being used as the binary encoding mechanism for recording the cache file and the transaction file. During subsequent discussions, some discomfort was expressed with Pickle as its primary client is IPC, not large file encoding. As a result, the encoding mechanism was changed to Protocol Buffers which is where the implementation stands today. There are drawbacks to both Pickle and Protocol Buffers as the cache is only updated at browser shutdown.

A snapshot-based approach, as currently used, would benefit from having a transaction journal file into which new, changed and deleted visits would be record. This transaction file would be kept constantly updated and then used at profile startup to make adjustments to the HQP index as restored from the most recent cache file snapshot. A new snapshot would then be recorded for the next profile startup.

The current implementation does not employ a transaction journal, thus there is some risk that historical information about site visits subsequent to profile startup could be lost if the application crashes.

Modifications to the HQP index caching code are underway such that all cache file and database operations will be performed on the appropriate thread. 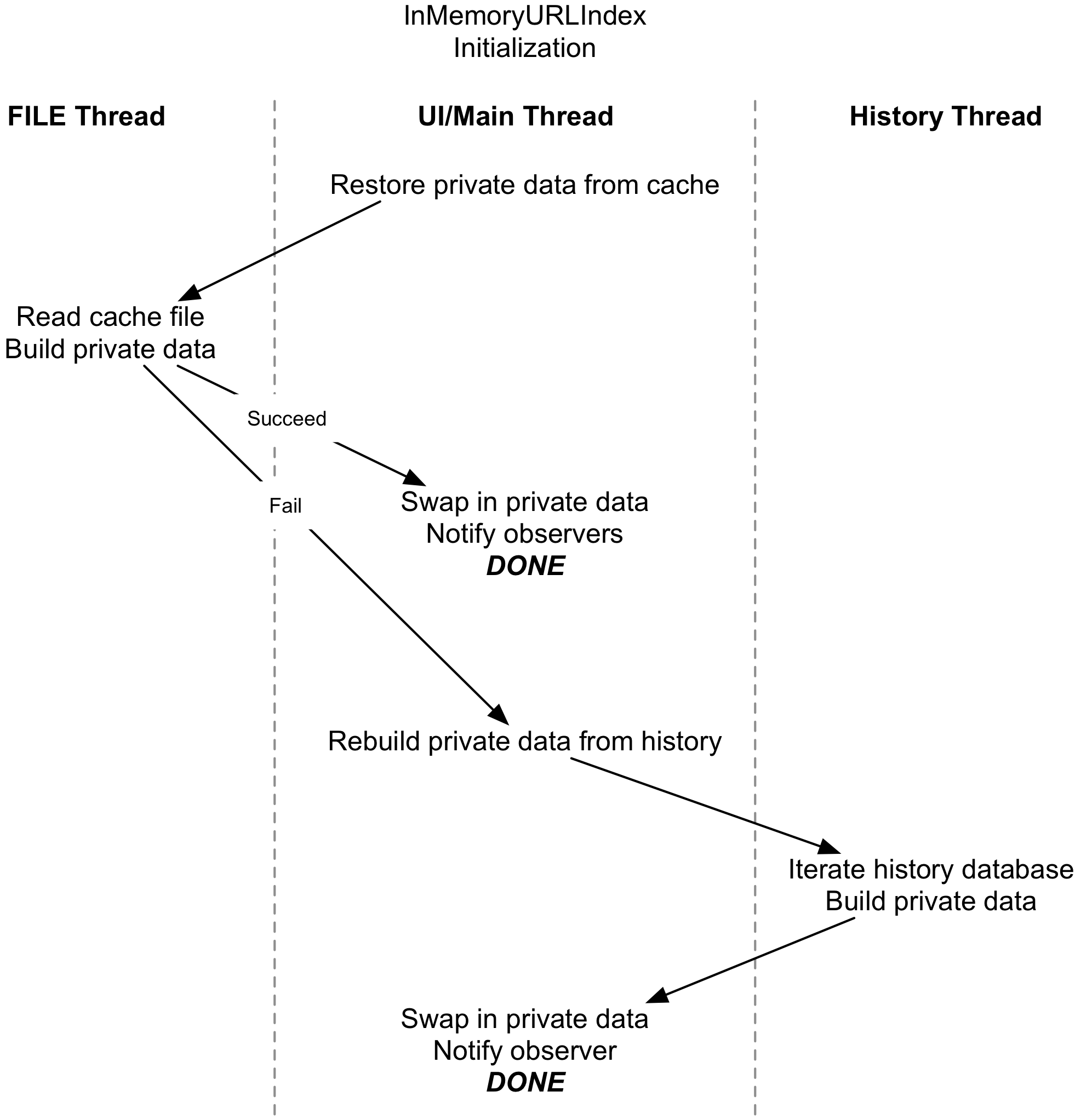 The illustration to the right shows the threading model for profile initialization. For a larger image click here.

Three threads are involved: the main (or UI) thread, the FILE thread, and the History Database thread.

If there is no HQP cache file or that file is unreadable for some reason then the history database (The database file itself is named 'History'.) is queried on the history thread and the internal index data for the HQP is reconstituted using the records from that database. Once this operation has completed the HQP index data is swapped in on the main thread. Note that if there is no history database, the database is corrupt, there are no qualifying records in the database, or any other error occurs that a new but empty HQP index data is swapped in.

The observer, if any, is notified on the main thread. (Currently, the only observer is in unit_tests.)

The illustration to the left shows the threading model for shutdown. For a larger image click here.

The observer, if any, is notified on the FILE thread. (Currently, the only observer is in unit_tests.)

The history database thread is not involved in shutdown.

The illustration below gives a detailed image showing all classes and functions involved in the profile startup/cache restoral operation. For a larger image click here. 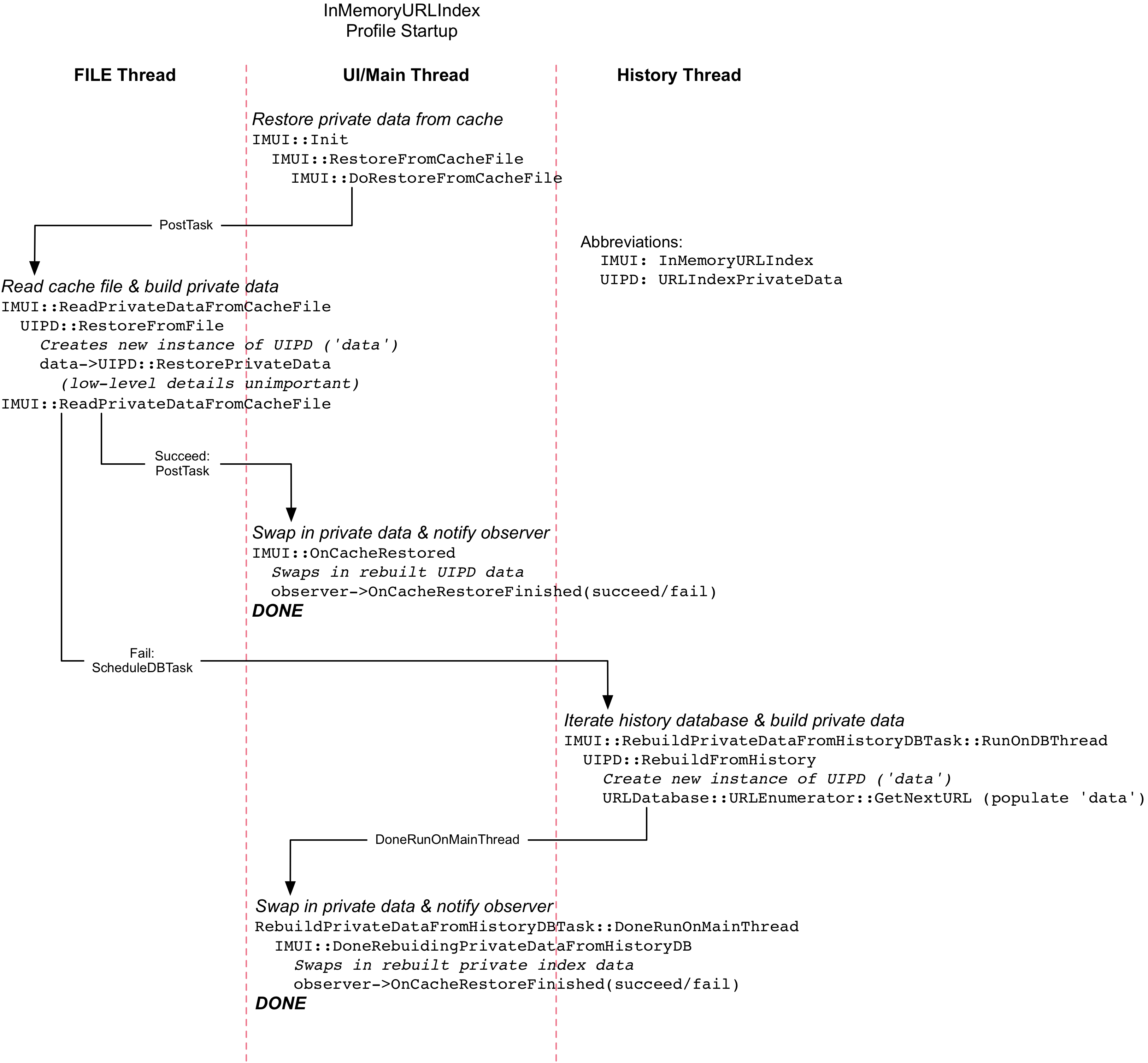 The illustration below a detailed image showing all classes and functions involved in the profile shutdown/cache saving operation. For a larger image click here. 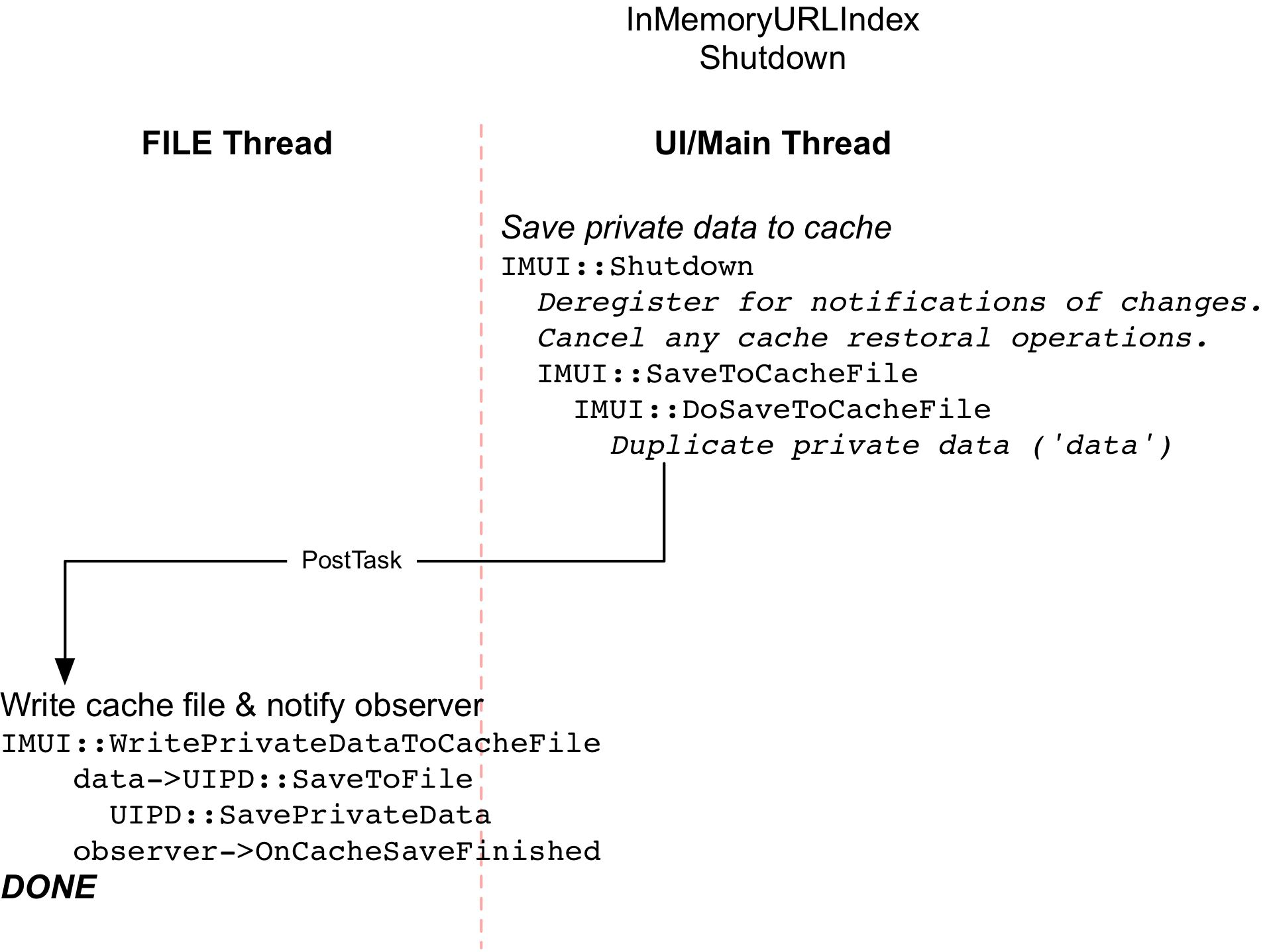