Many sites implement sharing/saving features through bookmarklets. Examples include Delicious, Facebook, Digg, and Google Reader. However, bookmarklets are hard to install, since they require dragging a link to the bookmarks bar. The following proposal builds on bookmarklets to enable simple sharing of pages in Chrome.

We move the star to the right-side of the Omnibox, and add a drop-down menu: 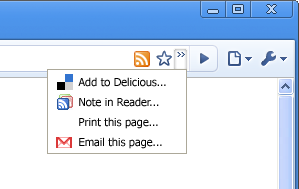 In this case, the "Email this page" action is basically a mailto: link with the subject and content prefilled.

Just like in other browsers, users can install a bookmarklet by dragging it onto a drop-target (in this case, the drop-down arrows). This dragging action will be interpreted as an implicit permission to install the bookmarklet, and thus won't require a permissions dialog. However, to make it easier to install bookmarklets, developers can also add rel="bookmarklet" to their bookmarklet <a> tags. This won't affect their behavior in other browsers. However, when the user clicks on such a link in Chrome, they will be presented with the following permissions dialog (exact copy TBD): 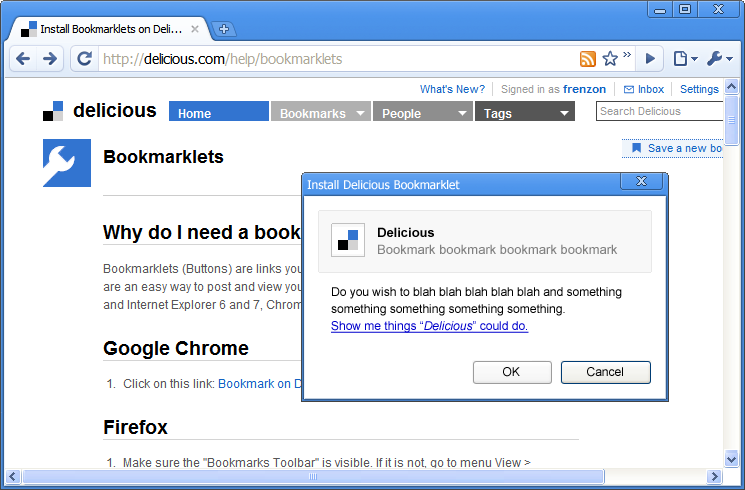 Bookmarklets can be managed by right-clicking on them in the drop-down menu: 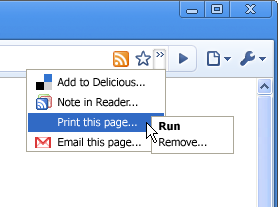 We may also provide an option to promote bookmarklets to the top level, in which case they will appear next to the star. Only bookmarklets with a favicon can be promoted in this way.