Now that there are Chromebooks with touch screens, it is important that we have an interface for users with disabilities to be able to interact with a touch screen. It's based on the same ideas used on iOS VoiceOver and Android TalkBack, but with a few Chrome-specific differences.

Currently iOS and Android provide mobile touch accessibility by allowing users to touch the screen to explore the content currently showing. The user can hear spoken feedback about whatever is under their finger. They may then perform certain gestures to send a click action to the last explored target. There are other gestures to adjust settings such as volume or reading speed, to navigate between items on the page, to enter passthrough mode (where touch events are sent through directly as if accessibility was off), and to perform many other actions.

Users may use a finger to explore the screen by touch, hearing spoken feedback about the item under their finger. They may then perform certain gestures such as tapping and swiping to send a click to the last explored target, entering passthrough mode (where touch events are sent through directly rather than being intercepted by the accessibility system), adjusting volume, changing tabs, or scrolling.

The feature turns on when spoken feedback is enabled. Currently there's no way to turn touch accessibility on or off independently; for now we're assuming that any users who want spoken feedback on probably want this functionality too, but we could make it a preference later.

The majority of the code exists in the touch exploration controller. When spoken feedback is enabled, an instance of this class is created and all touch events inputted by the user are rewritten through RewriteEvent. Sometimes these events are discarded, sometimes they are released with a delay, and sometimes they change the user's current state (e.g. from single finger pressed state to touch exploration state).

Why A New Set of Features?

note: the sample size was fairly small, and we hope that we'll be able to collect more user feedback when the first version is released.

Therefore, we have decided to implement the most useful features borrowed from Android and iOS as well as features completely unique to ChromeOS that took advantage of its own capabilities. For example, corner passthrough and side slide gestures wouldn't have worked as well on a tablet or mobile device, but take advantage of the Chromebook's bigger screen to give the user better accessibility.

This is a graph of the possible states the user can be in, and all of the user input and timer time-outs that causes the touch exploration controller to change the user's state. Occasionally touch presses and releases are dispatched to simulate clicks, and these dispatched events are also shown in this chart. 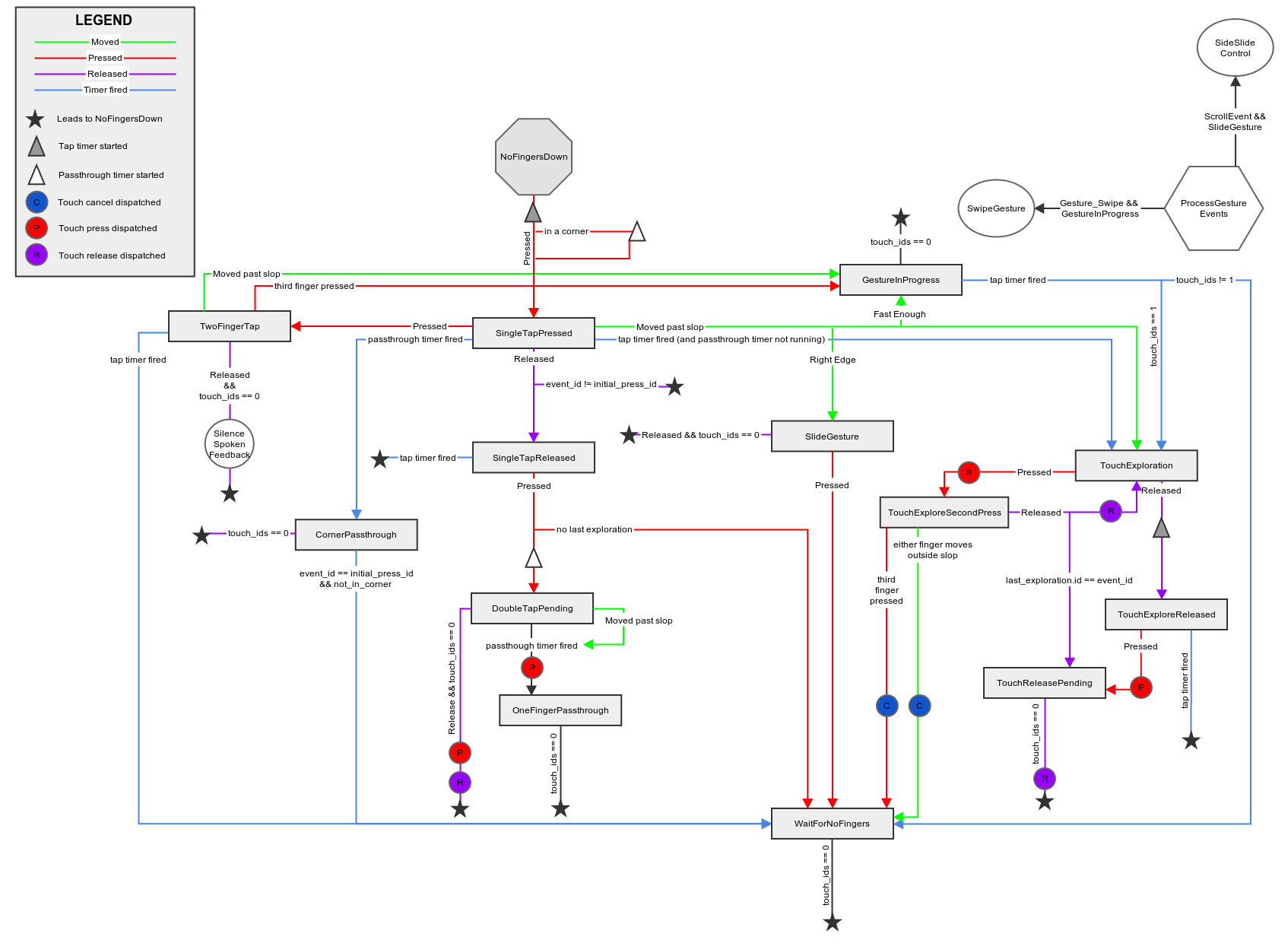 This chart was generated using https://www.gliffy.com

Here are some ideas that didn't make it into version one, but would be awesome to implement soon: