When diagnosing performance problems it can be valuable to see what Chrome is doing "under the hood." One way to get a more detailed view into what's going on is to use the about:tracing tool.

See Trace Event Profiling Tool (about:tracing) for more information on what this tool does.

Capture a trace on Chrome desktop

Sometimes Chromium developers will ask for about:tracing results in a bug report to help us understand what's going on. Here's an easy step-by-step guide: Submitting an Awesome Performance Bug

IMPORTANT: Before attaching a trace to a bug keep in mind that it will contain the URL and Title of all open tabs, URLs of subresources used by each tab, extension IDs, hardware identifying details, and other similar information that you may not want to make public.

Assuming $CHROME is set to the command you need on your OS to start chrome, the following will record the first 7 seconds of Chrome's lifetime into /tmp/foo.json

On Windows you can modify the properties for your Chrome shortcut to add this after where it says chrome.exe (don't forget to modify it back when you are done):

Capture a trace from Chrome on Android (on device)

First you need to enable Chrome's developer options. To do this, open Settings > About Chrome. Then tap "Application version" 7 times in a row:

After this you can access developer settings from Settings > Developer options. From this menu, select Tracing:

Select your categories and tap "Record trace" to start recording:

To stop the recording, pull down on the notification shade and tap "Stop recording". After this, you can access the trace with the "Share trace" button:

Capture a trace from Chrome on Android (with DevTools)

Tip: this also works with tracing the system Android WebView. 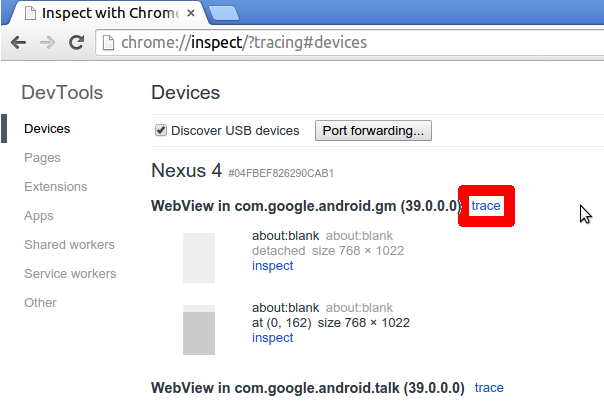 Capture a trace from Chrome on Android (on the command line)

You can use `adb_profile_chrome` from the build/android/ directory in Chromium's source checkout.

Run Chrome normally. Developers, however, may want to launch from the command line: 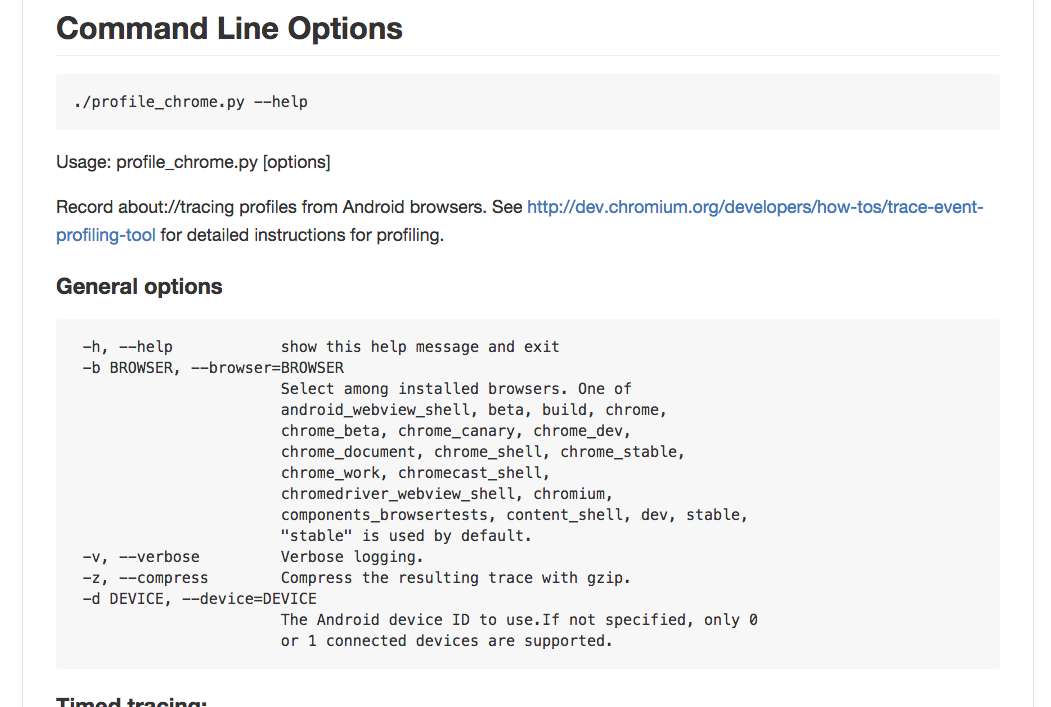 Note: build here refers to the version of Chrome you are tracing. Other valid values are stable, beta (see --help for a full list).

You can also use additional command line flags to capture more data. For example:

Adding more trace categories makes it possible to see events that are normally disabled. This particular example gives information about why the compositor scheduler decided to run a given action. To see the full list of categories, use --categories=list. 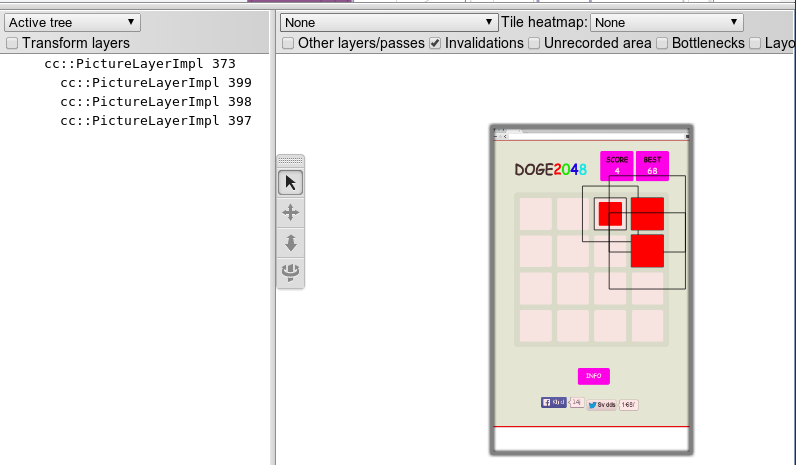 Captures rich layer data from the compositor. This is useful for understanding how the DOM affects the compositor's layer tree structure. When viewing traces like this, make sure to launch Chrome (on the desktop) with the --enable-skia-benchmarking command line flag so that all features are available.

5. Perf profiling data: --perf Perf is a sampling profiler which can help you find performance intensive parts of the source code. The --perf switch runs perf and automatically combines the data with all other enabled event sources. 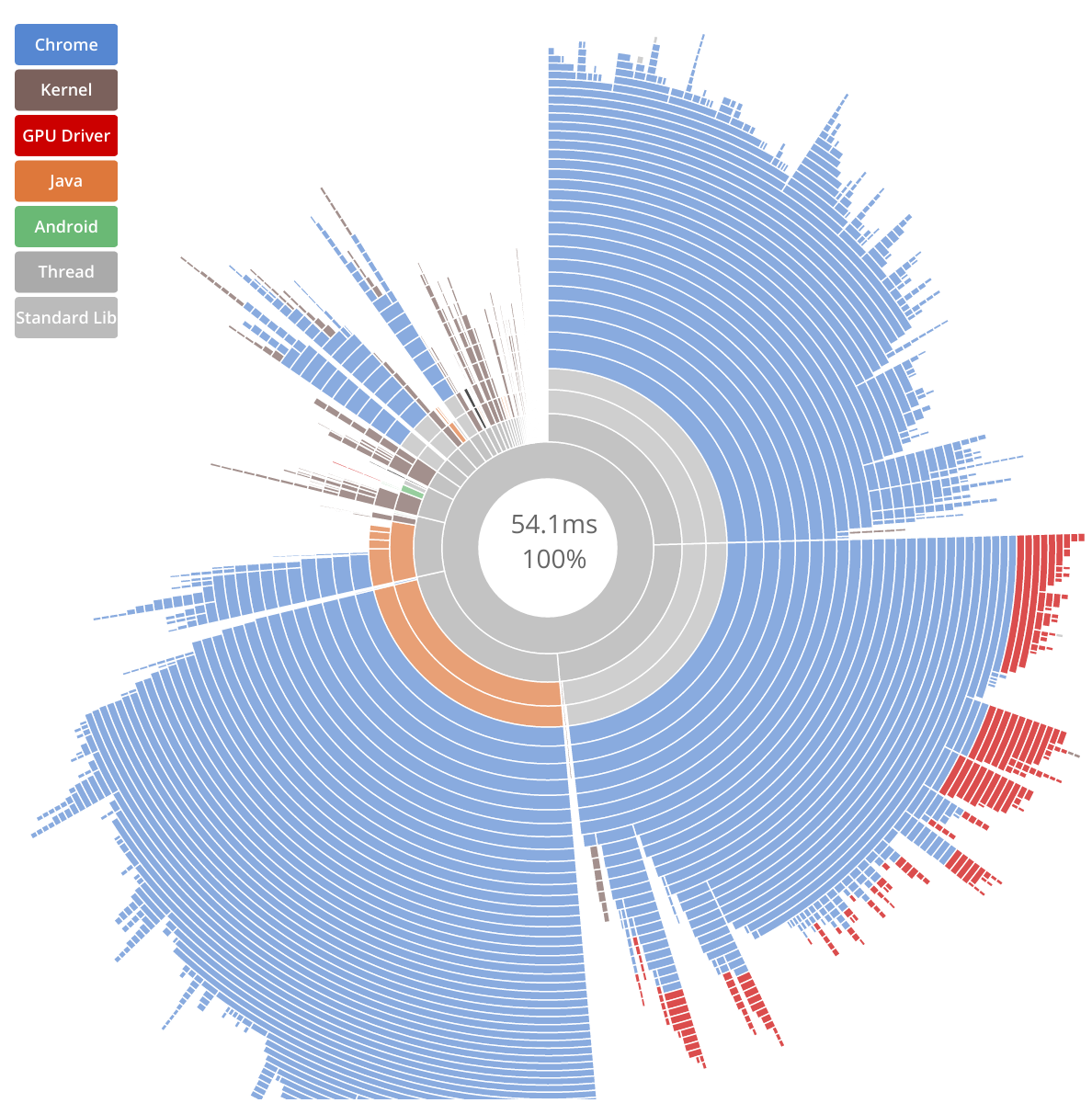 You can also view the raw recorded perf data using the command line which is printed out by adb_profile_chrome.

For more repeatable trace recordings you may want to consider using Telemetry to automate the process. In particular the --profiler=trace, --profiler=v8 and --profiler=android-systrace flags will save a trace for each tested page.

After recording one can save a trace report by pressing the Save button. This will save the trace in JSON format.

It is also possible to convert it to HTML (which is easier to link to) using Catapult's trace2html script.

This information is already detailed above.